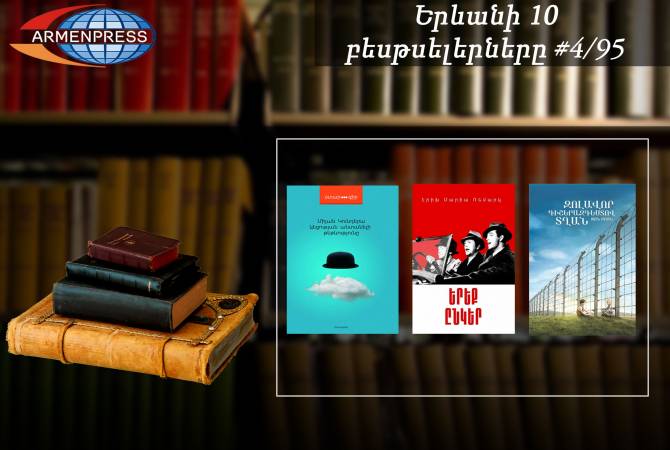 Mark Aren’s ‘Where Wild Roses Bloom’ is ranked 2nd in this week’s top bestselling book in the city.

“The Alchemist” by Brazilian author Paulo Coelho which was first published in 1988, has returned to the list and is ranked 3rd. Originally written in Portuguese, it has been translated into at least 69 languages as of December 2016.An allegorical novel, The Alchemist follows a young Andalusian shepherd in his journey to Egypt, after having a recurring dream of finding treasure there.

Narine Abgaryan’s Three Apples Fell From The Sky novel is 5th in this week’s list.

Three Comrades by Erich Maria Remarque is next. The novel is written in first person by the main character Robert Lohkamp, whose somewhat disillusioned outlook on life is due to his horrifying experiences in the trenches of the First World War's French-German front.

Steppenwolf by Herman Hesse is ranked 8th this week. Originally published in Germany in 1927, it was first translated into English in 1929.

Combining autobiographical and psychoanalytic elements, the novel was named after the lonesome canid of the steppes, coyote. The story in large part reflects a profound crisis in Hesse's spiritual world during the 1920s while memorably portraying the protagonist's split between his humanity and his wolf-like aggression and homelessness

Milan Kundera’s “The Unbearable Lightness of Being” comes next. It was published in 1984. The book chronicles the fragile nature of an individual's fate, theorizing that a single lifetime is insignificant in the scope of Nietzsche's concept of eternal return.

Stefan Zweig’s “Collected Stories” this week concludes the ranking. Zweig was an Austrian novelist, playwright, journalist and biographer. At the height of his literary career, in the 1920s and 1930s, he was one of the most popular writers in the world. The book was translated by Ara Arakelyan and Margarit Arakelyan.