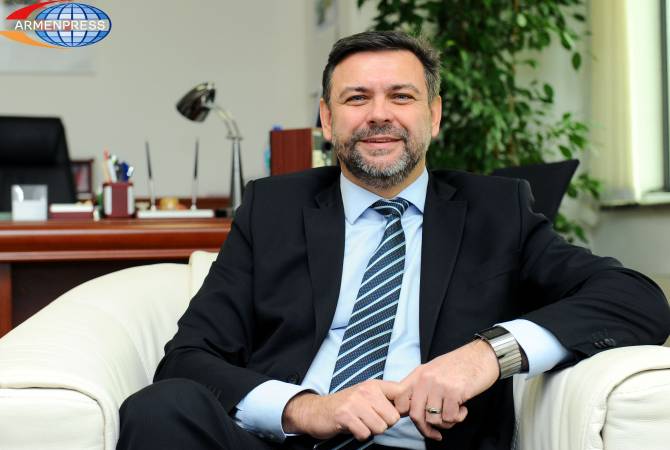 Petr Mikyska – Ambassador of the Czech Republic to Armenia, gave an interview to ARMENPRESS, talking about the Armenian-Czech relations, the development prospects of economic cooperation between the two countries, the role of the Armenia-EU agreement signed last year and other issues.

-Mr. Ambassador, 25 years of cooperation. Looking back what key achievements will you identify? What do we have now in the Armenian-Czech relations?

-This year we mark the 25th anniversary of our diplomatic relations with Armenia. It was a quarter of century of the ties between two new countries, as the Czech Republic was established on January 1, 1993 after the peaceful split of Czechoslovakia and Armenia only a short time earlier after the dissolution of the Soviet Union. We started from scratch and for relatively long time our relations were rather formal, with occasional political contacts and modest trade turnover. The picture changed with Eastern Partnership. This wide range European Union program of ties with six Eastern Europe partners became a priority for Czech foreign policy, as well as one of the priorities of the Government of Armenia, and helped to develop also bilateral relations between the EU member states, including Czechia, and Armenia. In 2011 and 2012 Armenia and the Czech Republic, respectively, opened their Embassies in capitals of the partner country and the relations took completely new, dynamic swing. Political ties are now on its highest level with multiple contacts of executive and legislative powers․Economic cooperation is, after certain deceleration after 2013, back on growing path. We have no unsolved issues. We develop multifaceted cooperation in education, healthcare, regional development, we try to assist the civil society and the Government in their efforts to make Armenia a democratic and prosperous country.

-The development of economic cooperation depends on many internal and external factors. After certain slowdown in our commercial turnover after the accession of Armenia to the Eurasian Economic Union exports of both countries grow at an accelerated pace. Based on the data of the Czech Statistical Office, in first eleven months of 2017 Czech exports to Armenia totaled USD 34.4 millions (94 per cent growth in comparison with the same period of 2016), Armenian exports to Czechia reached USD 3.2 millions (11 per cent growth). We are experiencing a positive change in the structure of our bilateral trade, as Armenia imports from Czechia less consumer goods and more technologies and capital goods, which is important for further development of national economy and export capacity of the country. Armenia also changes the structure of its exports to Czechia, from predominantly minerals previously to agricultural products, food and drinks (brandy and wine) and textile. Minerals stay as an important export item, but in lesser proportion. We encourage Armenian entrepreneurs to export to our country and to use all favorable prerequisites, such as the GSP+ scheme, export promotion oriented policy of both Governments and numerous business fora.

-What priorities do you see for further boosting the economic cooperation? According to you, what problems do the businessmen face in terms of investments?

-As I said, the development of economic cooperation reflects the national situation in both countries. On the Czech side we experience a steady growth of the economy and that should be seen as the opportunity for Armenian exporters. In Armenia we can observe the growth of production in many fields and we evaluate it as the opportunity to supply for example means for urbanand inter-city passenger transport, agricultural machinery, products of energetic engineering, and, in lesser extent and in connection with the development of the purchasing power of the population, consumer goods. Regarding the investments, I understand that Czech businessmen are still rather cautious observing the situation in the country and wait for the effect of the recently signed Comprehensive and Enhanced Partnership Agreement between the European Union and Armenia. There is a lot of work ahead, but I am hopeful that the Government of Armenia will succeed in improving the conditions for foreign investors and making the country attractive for new businesses.

-Among the fields no less important for the country’s economic development is tourism. It seems the works on this path in Armenia received a new impetus. What prospects do you see for deepening the bilateral cooperation on this path?

-The flow of Armenian tourists to the Czech Republic is quite stable. Prague is one of the most famous and main tourist destinations, people love Karlovy Vary,but other parts of the country remain aside. We try to present them to tourists. As for the opposite direction, we also see a structural change here,since traditionally mainly the youth, hiking lovers have been visiting Armenia, but they bring less contribution to Armenia’s economy as they do not spend a lot of money, do not stay in luxury hotels etc. It is already a positive step that Czech tourist companies include also Armenia in their tour packages. In addition to Yerevan, their main destinationsare also Tatev Monastery, Lake Sevan etc.

-In which part of Armenia have you been except in Yerevan?

-Almost everywhere. Of course, I cannot compare me toMr. Robin Böhnisch, former member of the Czech Parliament, former head of the Czech-Armenia inter-parliamentary friendship group, a man who is the author of the resolution condemning the Armenian Genocide. He visits Armenia several times a year, visits different places and takes photos. And he published a perfect book about Armenia, the description and history of these places in Czech and English are attached to the photos. I think this is the best book about Armenia.

-Mr. Ambassador, the signatureof the Armenia-EU Comprehensive and Enhanced Partnership Agreement (CEPA) in 2017 was a significant event for Armenia. You said the Czech businessmen wait for the effect of this Agreement on the country’s economy. What are your expectations from this Agreement? In your opinion, how it will affect the Armenia-EU and especially the Armenian-Czech ties?

-EU – Armenia relations are experiencing a very successful moment. The signature of the CEPA agreement and especially its implementation will give a new and very necessary impulse to the development not only of our relations, but mainly to the development of Armenia in many areas. I already mentioned the link between the relations of the EU and the Eastern partnership countries, including Armenia, and its positive influence on bilateral relations of EU member states with Armenia. Czech companies and their Armenian partners will profit of changing commercial and investment environment in Armenia, and not only commercial and investment. The CEPA agreement will make Armenia more democratic, attractive and closer country.

-Estonia was the first country that ratified the Agreement. What is the situation in the Czech Republic? When the country is expected to ratify the CEPA?

-The CEPA ratification procedure in Czechia can take some time due to internal political development –you may know that the Czech Government resigned today. Nevertheless, I am confident that the agreement will be ratified swiftly, I hope that this agreement ratification will not follow the faith of some bilateral agreements, not ratified by Armenian National Assembly since 2014.

-Mr. Ambassador, let’s talk about the bilateral cultural relations. With what main emphasis do you see the upcoming works in this sphere?

-Well, let´s not see the culture exclusively as something that should be “worked”, “directed” or “regulated” by the state actors. Culture is a living organism which feels the best if free and non-limited. We have wonderful examples of activities developing without any assistance of the ministries or Embassies and based on direct ties between the creators in both countries.  Of course, state institutions also add their part in the promotion of its own culture and bring it closer to the public of the partner country. In 2018 we commemorate not only 25 years of independent Czech Republic and diplomatic relations with Armenia, but also 100 years of independent Czechoslovakia, 80 years from the ignominious Treaty of Munich, 70 years from the communist putsch, 50 years from the Soviet invasion to Czechoslovakia. The “8” is somehow related to the history of my country (1918, 1938, 1948, 1968) and these anniversaries and topics will be present in our cultural projects this year, among others. We will present to Armenian public exhibitions, concerts, theatre performances, the scope is wide.

-Artsakh conflict is also among the most important issues for Armenia. In the recent period the OSCE Minsk Group Co-Chairs try to intensify the Armenia-Azerbaijan meetings, in particular, last year meetings of the Armenian, Azerbaijani Presidents, Foreign Ministers and Co-Chairs were held. How do you assess the current stage of the negotiation process over the Artsakh conflict? In your opinion, to what extent these meetings are effective for the peaceful settlement of the conflict?

-In fact, there is no other way to the peaceful solution of the Nagorno-Karabakh conflict than bilateral negotiations of both Presidents and Foreign Ministers, supported and promoted by the Co-Chairs of the OSCE Minsk Group, so the speculations on its effectivity in this or that situation are inappropriate.

- Mr. Ambassador, thank you for the interview.