Armen Sargsyan is RPA’s candidate for President of Armenia: Serzh Sargsyan already had a meeting with him | ARMENPRESS Armenian News Agency

Armen Sargsyan is RPA’s candidate for President of Armenia: Serzh Sargsyan already had a meeting with him 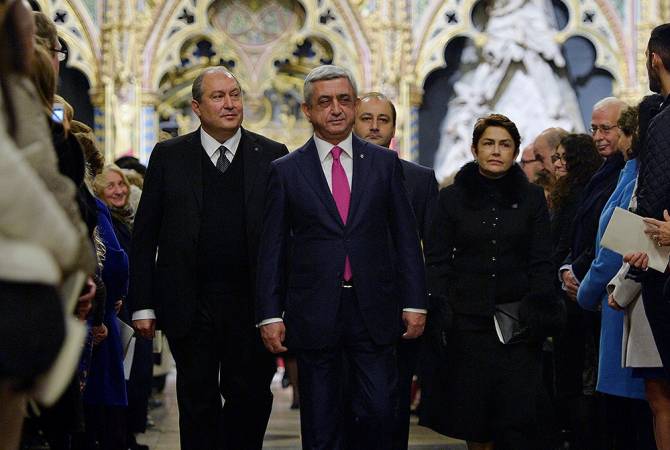 
YEREVAN, JANUARY 19, ARMENPRESS. Armen Sargsyan, former Prime Minster of Armenia, Armenia’s Ambassador to the United Kingdom, is the candidate of the Republican Party of Armenia for the position of the fourth President of Armenia, reports Armenpress.

President Serzh Sargsyan already had a meeting with Armen Sargsyan in the Presidential Palace.

Armen Sargsyan was born on June 23, 1953 in Yerevan. He is married and has two sons. He studied at Yerevan State University's Faculty of Theoretical Physics and Mathematics. He has been a lecturer at the Yerevan State University from 1976 to 1984. He also gave lectures at the Cambridge University. He was Armenia’s Ambassador to the UK from 1991 to 1995. Armen Sargsyan has been head of Armenia’s mission to the EU in 1995-1996. He was Armenia’s Prime Minister in 1996-1997. He has been re-appointed Armenia's Ambassador to the UK in 1998-1999. In September 2013 he for the third time assumed the post of the Armenian Ambassador to the UK. Since 2000 he is the founder president of Eurasia House International. In 2001-2013 he has been chief adviser to British Petrolium, Alcatel, Telefonica companies. He holds honorary and executive positions in a number of structures.

The Parliament will elect the fourth President of the Republic of Armenia on March 2.