YEREVAN BESTSELLER 4/94 - ‘Not For Sale’, ‘Steppenwolf’ and ‘Flowers For Algernon’ among weekly top ten 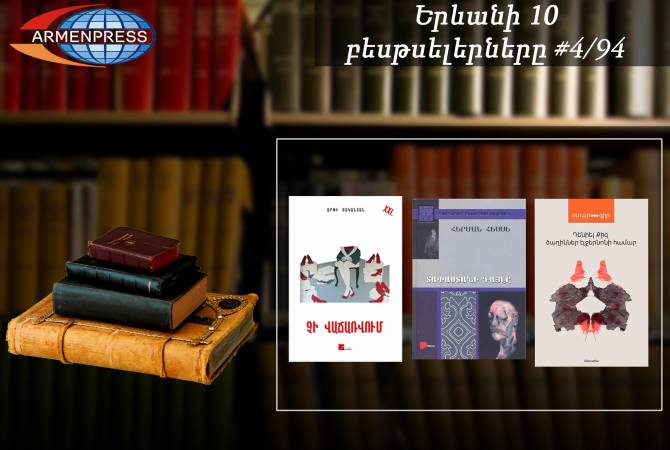 ‘The Alchemist’ by Brazilian writer Paulo Coelho is the 3rd in the list. Originally written in Portuguese, it became an international bestseller translated into some 70 languages as of 2016. An allegorical novel, The Alchemist follows a young Andalusian shepherd in his journey to Egypt, after having a recurring dream of finding treasure there.

Mark Aren’s ‘Where Wild Roses Bloom’ is ranked 4th in this week’s top bestselling book in the city.

Arpi Voskanyan’s ‘Not For Sale’ book returned to the bestselling list and is ranked 5th. The stories in the book cover a period of 20 years by presenting the author’s path passed from the young age until to average age.

‘Dandelion Wine’, 1957 novel by Ray Bradbury this week is ranked 6th. The novel is taking place in the summer of 1928 in the fictional town of Green Town, Illinois, based upon Bradbury's childhood home of Waukegan, Illinois. It was translated from English by Zaven Boyadjyan.

‘Flowers For Algernon’ by David Keyes is 7th in the list. The short story, written in 1958 and first published in the April 1959 issue of The Magazine of Fantasy & Science Fiction, won the Hugo Award for Best Short Story in 1960.

New book ‘Three Apples Fell from the Sky’ by Narine Abgaryan has entered in the list capturing the 8th position. It’s a story about a village in highlands and its small number of residents each of whom is a little crazy. Naira Khachatryan translated the book from Russian. The book has been edited by Hayarpi Khachatryan.

‘Steppenwolf’ novel by German-Swiss author Hermann Hesse is 9th in the list. Originally published in Germany in 1927, it was first translated into English in 1929. Combining autobiographical and psychoanalytic elements, the novel was named after the lonesome wolf of the steppes. The story in large part reflects a profound crisis in Hesse's spiritual world during the 1920s while memorably portraying the protagonist's split between his humanity and his wolf-like aggression and homelessness. Hesse would later assert that the book was largely misunderstood.

‘The Bastard of Istanbul’ concludes this week’s bestselling list. This is a 2006 novel by Turkish bestselling female author Elif Şafak, written originally in English and published by Viking Adult. It was translated by Aslı Biçen into her native language Turkish under the title Baba ve Piç in March 2006, and became a bestseller. The author of the Armenian translation of the book, American-Armenian literary critic Maro Madoyan-Alajanyan stated this at the press conference held on May 21. Maro Madoyan-Alajanyan underscored: "Elif Şafak must be known to the Armenian society. Her novel is dedicated to the consequences of the Genocide. She implemented finest contemporary style. This is her second novel in English language."