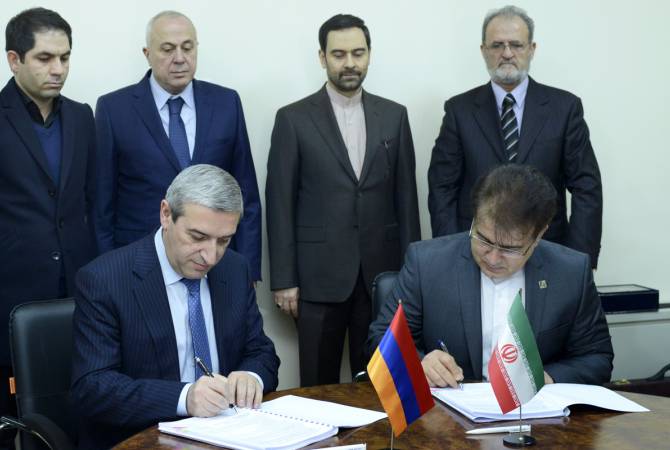 
YEREVAN, JANUARY 15, ARMENPRESS. Within the frames of the loan agreement signed between Armenia and the European Bank for Reconstruction and Development (EBRD) on November 23, 2012, the Iranian Ariana Tunnel Dam Co. (Iran) will implement the construction of new bridge on the Debed river in the Sadakhlo-Bagratashen border checkpoint between Armenia and Georgia, the Armenian ministry of transport, communication and IT told Armenpress.

The signing of the agreement for designing and constructing the new bridge within the frames of the EBRD-funded North Corridor Modernization Program was held in the Armenian ministry of transport, communication and IT on January 15.

From the Armenian side the agreement was ratified by minister of transport, communication and IT Vahan Martirosyan, and from the Iranian side it was ratified by president of the Ariana Tunnel Dam Co.  Ali Mousavi.

The Armenian minister welcomed the entry of the Iranian construction company to Armenia and attached importance to the works to be carried out on high-quality and time.

“Let’s consider the victory of this tender as a first step and hope that Iranian companies will later participate in the projects in Armenia, the investment programs, in particular, in the construction of upcoming tunnels in the southern part of North-South corridor investment program”, minister Martirosyan said.

The Iranian construction company representatives assured the minister that they will conduct the works on the best quality.