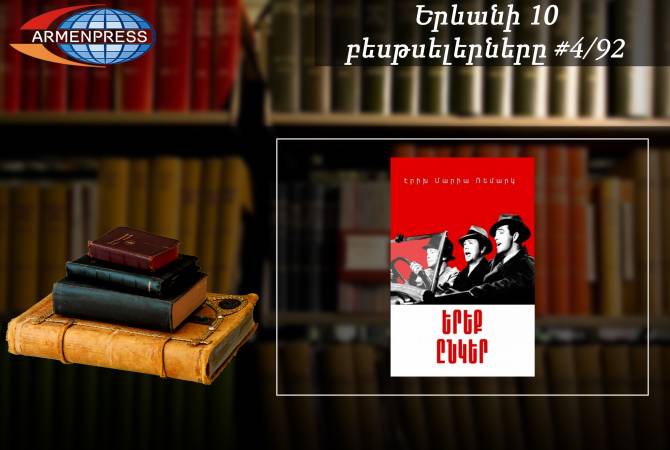 This week Mark Aren’s Where Wild Roses Bloom is ranked 2nd in the list.

Narine Abgaryan’s Manyunya is third in the list. The book was awarded with Russia’s national literary prize.

The Diary of Anne Frank, is a book of the writings from the Dutch language diary kept by Anne Frank while she was in hiding for two years with her family during the Nazi occupation of the Netherlands. After Anne’s death in a concentration camp, the diary was retrieved by Miep Gies, who gave it to Anne's father, Otto Frank, the family's only known survivor, just after the war was over. The diary has since been published in more than 60 languages. The Diary of Anne Frank is ranked 6th in this week’s Yerevan Bestseller.

New book appeared in the list and is ranked 7th. Three Comrades by German author Erich Maria Remarque is a novel first published in 1936. It is written in first person by the main character Robert Lohkamp, whose somewhat disillusioned outlook on life is due to his horrifying experiences in the trenches of the First World War's French-German front. He shares these experiences with Otto Köster and Gottfried Lenz, his two comrades with whom he runs an auto-repair shop in late 1920s Berlin. Remarque wrote the novel in exile.

The Alchemist by Brazilian writer Paulo Coelho comes next. Originally written in Portuguese, it became an international bestseller translated into some 70 languages as of 2016. An allegorical novel, The Alchemist follows a young Andalusian shepherd in his journey to Egypt, after having a recurring dream of finding treasure there.

Paper Towns by John Green returned to the list, capturing the 9th position. It was written primarily for an audience of young adults, and was published on October 16, 2008. The novel is about the coming-of-age of the protagonist, Quentin "Q" Jacobsen and his search for Margo Roth Spiegelman, his neighbor and childhood sweetheart.

Daniel Glattauer’s Forever Yours novel concludes the bestselling list of the week. Judith, in her mid-thirties and single, meets Hannes when he steps on her foot in a crowded supermarket. Hannes is an architect - single and in the prime of life. Not only is he every mother-in-law's dream, but Judith's friends are also bowled over by him. At first Judith revels in being put on a pedestal by this determined man who seems to have eyes only for her. But as time goes by, she finds his constant displays of affection increasingly wearying and his intensive attention becomes oppressive and overwhelming. The book is ranked 9th.