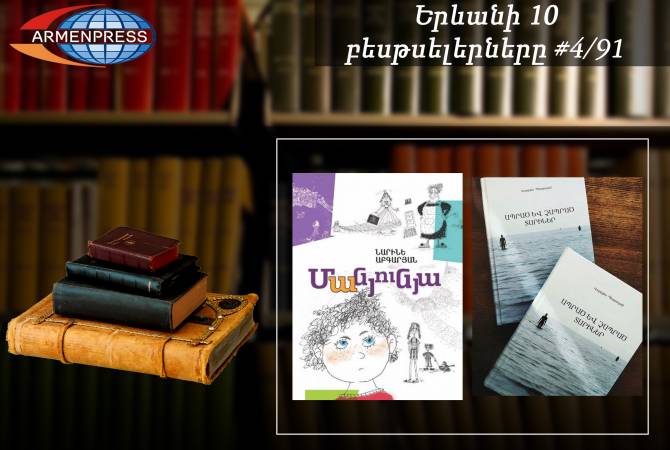 Narine Abgaryan’s Manyunya is second in the list. The book was awarded with Russia’s national literary prize.

Mark Aren’s Where Wild Roses Bloom is ranked 3rd in this week’s list.

Rope of a guilt by Hovhannes Yeranyan is 6th. This is the 7th book of the author. The book has been edited by Arkmenik Nikoghosyan.

The Diary of Anne Frank, is a book of the writings from the Dutch language diary kept by Anne Frank while she was in hiding for two years with her family during the Nazi occupation of the Netherlands. After Anne’s death in a concentration camp, the diary was retrieved by Miep Gies, who gave it to Anne's father, Otto Frank, the family's only known survivor, just after the war was over. The diary has since been published in more than 60 languages. The Diary of Anne Frank is ranked 7th in this week’s Yerevan Bestseller.

Fahrenheit 451 by Ray Bradbury is 8th. Fahrenheit 451 is a dystopian novel published in 1953. It is regarded as one of his best works. The novel presents a future American society where books are outlawed and "firemen" burn any that are found. The title refers to the temperature that Bradbury understood to be the autoignition point of paper.

The Prophet comes next. It’s a book of 26 prose poetry fables written in English by the Lebanese-American artist, philosopher and writer Kahlil Gibran. It was originally published in 1923 by Alfred A. Knopf. It is Gibran's best known work. The Prophet has been translated into over 40 different languages and has never been out of print.