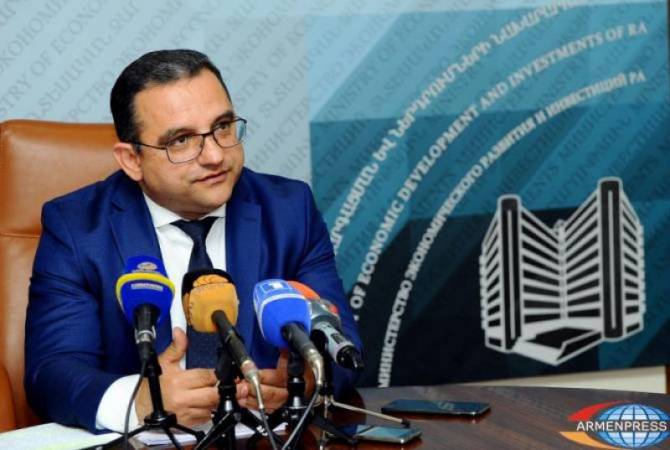 
YEREVAN, DECEMBER 21, ARMENPRESS. Deputy minister of economic development and investments Tigran Khachatryan says it is likely that the government will end 2017 by more than 7% GDP growth, reports Armenpress.

After the Cabinet meeting, he told reporters that the results of 11 months have already been summed up, according to which a 7.3% increase in the economic activity index has been recorded.

“We have leading spheres, such as industry, services and trade. The industry grew by more than 12%, and in case of services and trade the increase is more than 14% which is quite welcoming taking into account that this is taking place by the influence of higher export figures. We have recorded up to 23% increase in exports”, the deputy minister said, adding that the next good news is that a small, but positive figure has been recorded in the agriculture field compared to the negative figure of the past 10 months.

The deputy minister expressed hope that by the end of the year the economic activity index will remain the same as it is now.

According to him, more than 14% increase in trade and services is greatly linked with the increase of incoming tourism. “The economic growth is always very close to the economic activity. These two numbers are different when structural changes have been made in the economy”, he said.

Commenting on the view that the government announces to end the year by 4.5 economic growth, the deputy minister noted: “It will be much higher. 10 days are left for the end of the year, let’s wait and we will see. More than 7% increase is likely to be”.

Asked how it will be possible to maintain this 7% economic growth in the upcoming years, he said in response: “The government does everything for the export to continue growing at higher rates”.