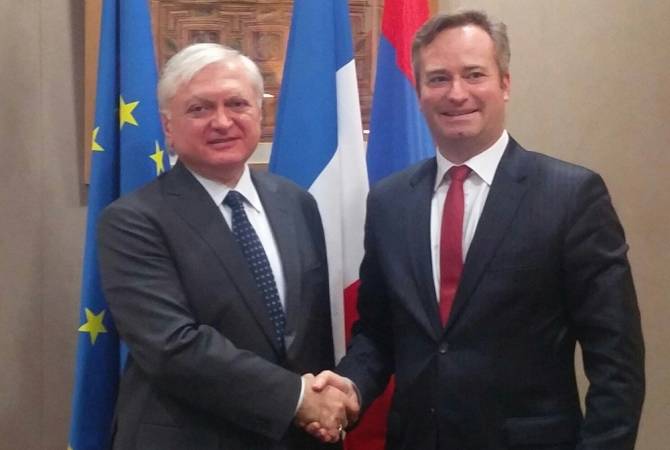 
YEREVAN, DECEMBER 20, ARMENPRESS. Foreign Minister of Armenia Edward Nalbandian, who is in Paris on a working visit, met with Jean-Baptiste Lemoyne, Minister of State of the Ministry of Foreign Affairs of France, the Armenian ministry told Armenpress.

Welcoming the guest, Minister of State Lemoyne recalled with warmth the meeting with Minister Nalbandian within the framework of the Ministerial Conference of La Francophonie held in Paris on November 26. The officials discussed the preparatory works for the Summit of La Francophonie to be held in Yerevan in 2018.

Throughout the meeting the sides touched upon a wide range of issues of the agenda of Armenian-French privileged relations. Minister Nalbandian and Minister of State Lemoyne had a discussion on issues related to inter-parliamentary contacts, decentralized cooperation, expansion of trade and economic ties, and strengthening of scientific-educational collaboration.

In the context of the Comprehensive and Enhanced Partnership Agreement signed with the EU, the sides touched upon Armenia-European Union relations.

Foreign Minister of Armenia briefed his interlocutor on the joint efforts of Armenia and the OSCE Minsk Group Co-Chair countries aimed at the peaceful settlement of the Nagorno Karabakh conflict.

They also exchanged views on a number of urgent international and regional issues.