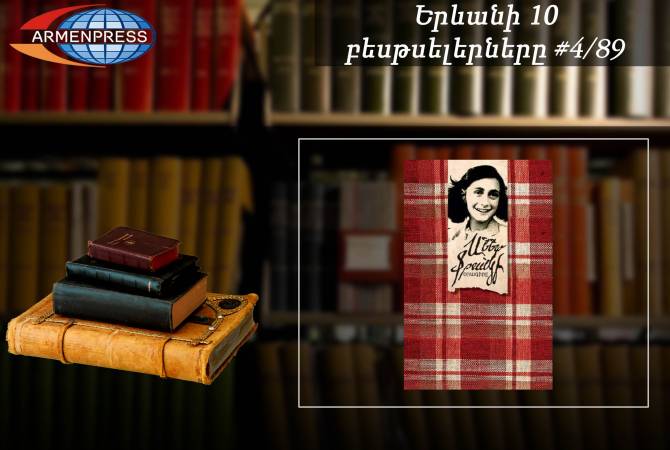 Vardges Petrosyan’s Years Lived and Not Lived is ranked second this week.

Alexievich is a Belarusian investigative journalist and non-fiction prose writer who writes in Russian. She was awarded the 2015 Nobel Prize in Literature "for her polyphonic writings, a monument to suffering and courage in our time". She is the first writer from Belarus to receive the award.

‘Blind Punctuation’ by Aram Avetis is 5th in the list, followed by Edgar Harutyunyan’s Unfound Chamomiles. The book is about human relationship, love, friendship and betrayal.

The Diary of Anne Frank, is a book of the writings from the Dutch language diary kept by Anne Frank while she was in hiding for two years with her family during the Nazi occupation of the Netherlands. After Anne’s death in a concentration camp, the diary was retrieved by Miep Gies, who gave it to Anne's father, Otto Frank, the family's only known survivor, just after the war was over. The diary has since been published in more than 60 languages. The Diary of Anne Frank is ranked 6th in this week’s Yerevan Bestseller.

Stefan Zweig’s ‘Collected Stories’ is ranked 7th. Zweig was an Austrian novelist, playwright, journalist and biographer. At the height of his literary career, in the 1920s and 1930s, he was one of the most popular writers in the world. The book was translated by Ara Arakelyan and Margarit Arakelyan.

The Unbearable Lightness of Being by Milan Kundera comes next. The novel is about two women, two men, a dog and their lives in the 1968 Prague Spring period of Czechoslovak history.

Antoine de Saint-Exupéry’s Terre des homes, literally translated as Land of Men, published in English as Wind, Sand and Stars is 4th in this week’s list.

The list is concluded with Rope of Guilt by Hovhannes Yeranyan.