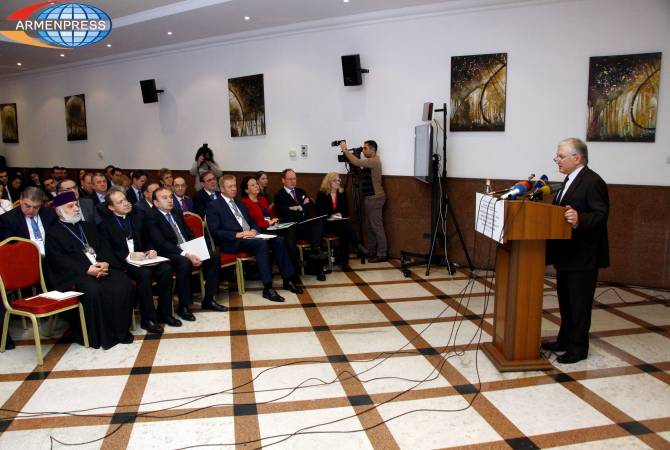 
YEREVAN, NOVEMBER 22, ARMENPRESS. Conference on “Preventing and Countering Hate Crimes against Christians and Members of other Religious Groups - Perspectives from the OSCE and Beyond” has kicked off in Armenia on November 22, reports Armenpress.

It is co-organized by the Austrian 2017 OSCE Chairmanship and the OSCE Office for Democratic Institutions and Human Rights (ODIHR) with the support of the Armenian Foreign Ministry.

Armenian foreign minister Edward Nalbandian delivered opening remarks at the conference, in particular, attaching importance to the fact that it is being held in Armenia.

“The topic of the conference is selected right and on time enabling us to overcome the challenges facing the Christians and other religious groups. This conference is important for Armenia for several reasons. Located historically in the crossroads of different civilizations Armenia has formed traditions of deep roots of respect to jointly co-exist with other cultures and religious. As a nation to first adopt Christianity as a state religion, Armenians stand in the roots of Christian civilization. As a nation, that has communities in nearly 100 countries of the world, Armenians personally know how much the tolerance is important and what are the problems of hate speech and discrimination”, the Armenian FM said, adding that hosting the conference in Yerevan is a chance to present and exchange the national experience.

“Historically being persecuted in the homeland under the foreign force, including on religious grounds, Armenians, after joining the community of sovereign states, cannot remain indifferent to the sufferings of those who continue facing the consequences of discrimination and hatred. We are actively taking part in the international efforts aimed at preventing the discrimination and violence based on identity. In this regard the recent initiatives are the adoption of the resolution on the prevention of the genocide in the UN Human Rights Council in 2015, as well as the adoption of the resolution in 2015 on the International Day of the Remembrance of the Genocide victims in the UN General Assembly”, FM Nalbandian said, stating that these efforts continue.

He said fight against hate speech, intolerance and xenophobia are among Armenia’s main priorities still in 2013 when Armenia was chairing in the Council of Europe. “Hosting this conference in Armenia is an additional step in the circle of efforts that aim at increasing awareness on the religious groups who are in danger. We have supported the efforts of our partner countries that aimed at solving the protection issues of ethnic religious groups in the Middle East. Armenia also keeps in its spotlight the protection issues of refugees and migrants in the conditions of vulnerable groups of the Middle East. We have formed a wide circle of commitments within the OSCE which aim at fighting against racism, xenophobia, discrimination and intolerance”, he said.

He also touched upon the commitments assumed by the OSCE participating states, adding that it’s time to strengthen effective mechanisms and expert capacities to support the participating states to take steps on protecting the Christians and other religious groups.