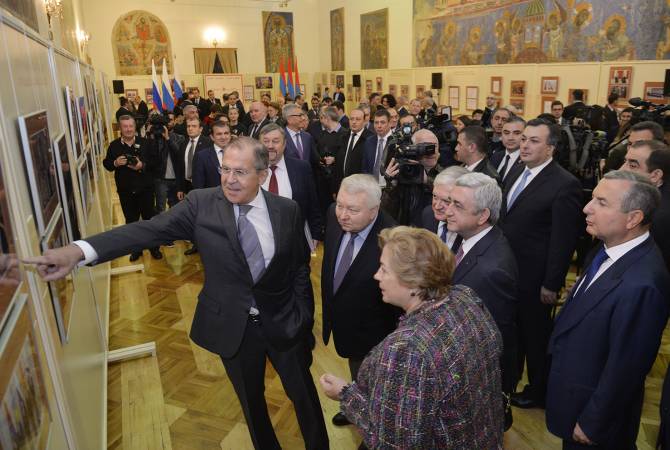 The title of the exhibition of the archive materials dedicated to the 25th anniversary of establishing the Armenian-Russian diplomatic relations expresses the true nature of the strategic partnership of our two countries. During the last quarter century he Armenian-Russian relations have been elevated to the highest level – by including all sectors of intergovernmental cooperation. A respectable legal-contractual basis has been formed. The Friendship, Cooperation and Mutual Aid Agreement between Armenia and Russia, the 20th anniversary of which we celebrated in August, and the allied partnership treaty aimed for the 21st century are at the foundation of this.

The Armenian-Russian strategic cooperation stands out by high trust political dialogue. We develop foreign policy coordination in the international arena in a stakeholder manner, within multilateral unions. With joint efforts we strengthen the successful partnership in the defense and military technical fields, we develop productive cooperation in the commercial, energy and transportation fields. Inter-regional ties are enhanced and deepened yearly, partnership in the cultural, scientific and educational fields is expanded.

It is important that today millions of people are involved in the Armenian-Russian cooperation, business and scientific communities, youth and non governmental organizations. This opens new opportunities and prospects for further work aimed at strengthening allied partnership for the welfare of the peoples of the two countries, for the benefit of ensuring security and stability in Southern Caucasus.

I would like to thank all who had their contribution in organizing this rich and interesting exhibition”, the president said.