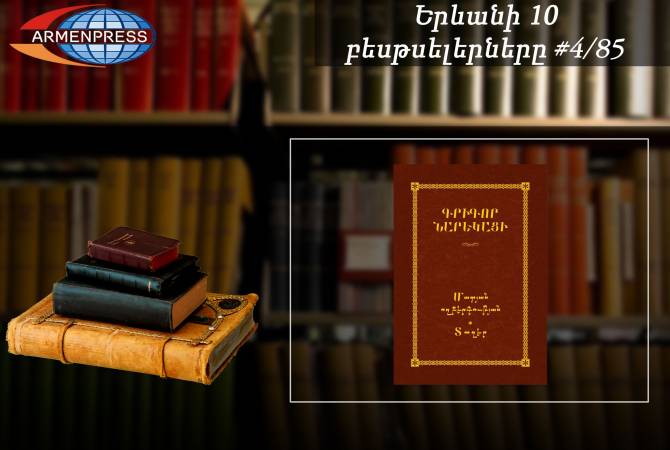 ‘The Book of Lamentations’ by St. Gregory of Narek is ranked 2nd in the list. The mystical poem "Book of Lamentations" has been translated into many languages and has played a significant role in the development of the Armenian literary language. In 95 grace-filled prayers St. Gregory draws on the exquisite potential of the Classical Armenian language to translate the pure sighs of the broken and contrite heart into an offering of words pleasing to God. The result is an edifice of faith for the ages, unique in Christian literature for its rich imagery, its subtle theology, its Biblical erudition, and the sincere immediacy of its communication with God.

Mark Aren’s ‘Where Wild Roses Bloom’ comes next. The story describes the inner world of an Armenophobic Turkish former serviceman, when he, already an old man, suddenly hears a lullaby song that reminds him of his mother and later finds out that the song is in Armenian: realizing his parents were Armenians. He spends his remaining life searching the graves of his parents, without knowing that it was a misunderstanding.

Davit Samvelyan’s ‘Winter of Rodin’ this week is ranked 5th. It includes short stories and essays.

‘Collected Stories of Guy de Maupassant’ is 6th. It includes the author’s best works. Guy de Maupassant is an author of numerous stories, novels depicting France’s daily life. His numerous works have been translated and published in Armenian.

Edgar Harutyunyan’s another book ‘Art of Devotion or Ode to Rose’ is ranked 7th in this week’s list.

Oscar Wilde’s ‘The Picture of Dorian Gray’ returned to the list and is ranked 8th. Dorian Gray is the subject of a full-length portrait in oil by Basil Hallward, an artist who is impressed and infatuated by Dorian's beauty; he believes that Dorian's beauty is responsible for the new mode in his art as a painter. Through Basil, Dorian meets Lord Henry Wotton, and he soon is enthralled by the aristocrat's hedonistic worldview: that beauty and sensual fulfillment are the only things worth pursuing in life.

Daniel Glattauer’s ‘Forever Yours’ novel is a new book in the bestselling list of the week. Judith, in her mid-thirties and single, meets Hannes when he steps on her foot in a crowded supermarket. Hannes is an architect - single and in the prime of life. Not only is he every mother-in-law's dream, but Judith's friends are also bowled over by him. At first Judith revels in being put on a pedestal by this determined man who seems to have eyes only for her. But as time goes by, she finds his constant displays of affection increasingly wearying and his intensive attention becomes oppressive and overwhelming. The book is ranked 9th.

‘The Book of Lamentations: Odes’ by St. Gregory of Narek concludes this week’s list.