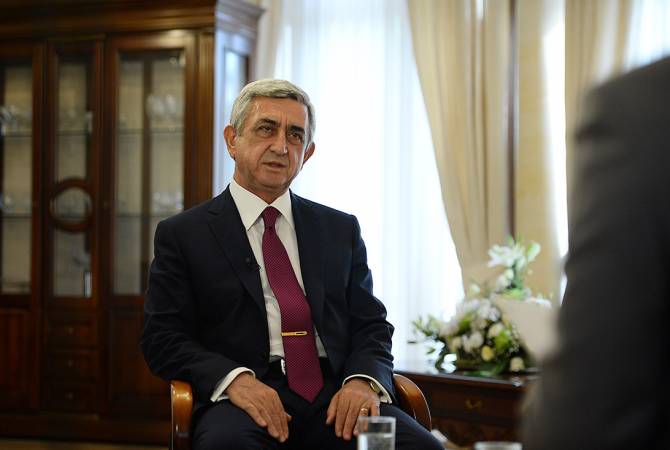 
YEREVAN, NOVEMBER 6, ARMENPRESS. The Indian authorities have a desire to develop the Armenian-Indian relations, President of Armenia Serzh Sargsyan said in an interview to the Indian DD news.

“The Armenian government is ready to create favorable conditions for Indian businessmen, even at the legislative level. We stand ready to establish tax breaks for those enterprises which will produce in Armenia and will export those products from Armenia to the other markets. This year we launched the construction of free economic zone on our border with Iran, and that is an important step to facilitate export to Iran. The Meridian free economic zone successfully operates in Armenia where jewelers are involved. We have the Alliance free economic zone where companies with latest technologies operate. Last year we produced the first Armenian mobile phone. It’s very interesting to work and run a business in these zones”, the President said.

President Serzh Sargsyan paid a working visit to India on the invitation of Prime Minister of India Narendra Modi on November 2. Within the framework of his visit, the President of Armenia had meetings with the country’s top leadership: Prime Minister Narendra Modi, President Shri Ram Nath Kovind, and Vice President Shri M. Venkaiah Naidu. Serzh Sargsyan also attended the plenary session of the “World Food: India -2017” conference, and the ceremonious opening of an international food industry exhibition. He also had a meeting with the representatives of the Armenian community.