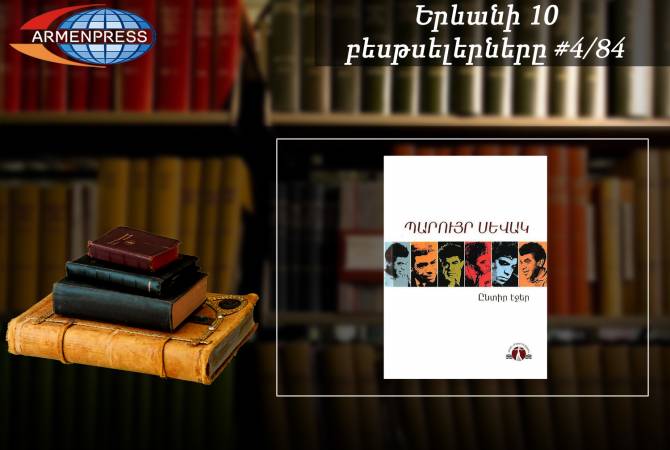 The story evolves around an elderly Turkish soldier and his attempts to find the graves of his parents, who he thinks were Armenians. A movie adaptation of the story will soon be filmed.

The Red-Haired Woman by Turkish novelist and Nobel Prize laureate Orhan Pamuk is ranked 3rd this week. The Red-Haired Woman is the story of a well-digger and his apprentice looking for water on barren land. It is also a novel of ideas in the tradition.

Milan Kundera’s The Unbearable Lightness of Being comes next in the list.

The Unbearable Lightness of Being takes place mainly in Prague in the late 1960s and early 1970s. It explores the artistic and intellectual life of Czech society from the Prague Spring of 1968 to the invasion of Czechoslovakia by the Soviet Union and three other Warsaw Pact countries and its aftermath.

“Selected Pages” by Armenian poet Paruyr Sevak is next in the list, followed by Davit Samvelyan’s The Winter of Roden.

Hermann Hesse’s Siddhartha  is ranked 7th this week.  The novel deals with the spiritual journey of self-discovery of a man named Siddhartha during the time of the Gautama Buddha. The book, Hesse's ninth novel, was written in German, in a simple, lyrical style. It was published in the U.S. in 1951 and became influential during the 1960s.

Collected Stories by Stefan Zweig is 8th in this week’s list. Zweig was an Austrian novelist, playwright, journalist and biographer. At the height of his literary career, in the 1920s and 1930s, he was one of the most popular writers in the world.

Collected Stories by French author Guy De Maupassant is 9th. Maupassant was a protégé of Flaubert and his stories are characterized by economy of style and efficient, effortless dénouements (outcomes). Many are set during the Franco-Prussian War of the 1870s, describing the futility of war and the innocent civilians who, caught up in events beyond their control, are permanently changed by their experiences.

Paper Towns by John Green is 10th in this week’s list. It was written primarily for an audience of young adults, and was published on October 16, 2008. The novel is about the coming-of-age of the protagonist, Quentin "Q" Jacobsen and his search for Margo Roth Spiegelman, his neighbor and childhood sweetheart.