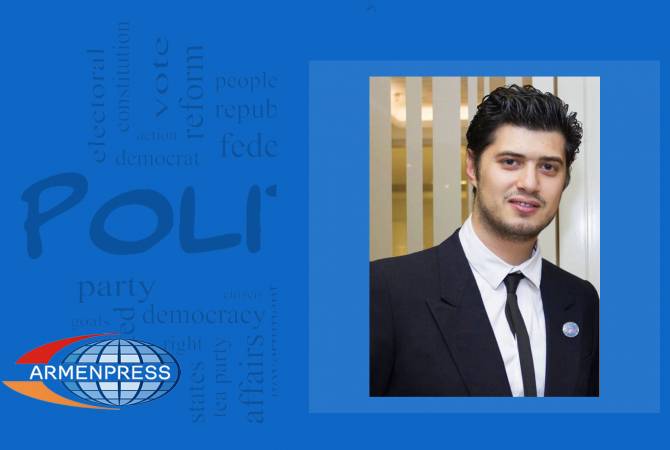 
YEREVAN, OCTOBER 10, ARMENPRESS. The 4th congress of European-Armenians will be held in Belgium on October 18. The event will be attended by Catholicos Aram I of the Great House of Cilicia, foreign minister of Armenia Edward Nalbandian and others.

Harout Chirinian – Communication and PR Officer at the European Armenian Federation for Justice and Democracy (EAFJD), gave an interview to ARMENPRESS talking about the details of the congress, the OSCE Minsk Group Co-Chairs’ visit to Armenia, as well as regional developments.

-The 4th congress of European-Armenians will be held on October 18 and 19. In what stage are the preparation works?

-The preparation works are underway. The guests, who will deliver welcoming remarks at the beginning of the congress, have already approved their participation. Catholicos Aram I of the Great House of Cilicia, Armenian foreign minister Edward Nalbandian, Diaspora minister Hranush Hakobyan, high-ranking officials from Artsakh, as well as specialist speakers will attend the congress. We also expect the participation of dozens of MEPs. I want to state that the number of European-Armenian unions or individuals is already high.

-What issues are included in the congress agenda? How will this congress be different from the previous ones?

-The congress will touch upon 4 key topics: demanding fight for recognition and reparation of the Armenian Genocide in Europe, the process of transferring this fight to a legal field, the issue of Artsakh people’s free right to self-determination, as well as the Turkish and Azerbaijani lobbying in Europe and ways to counter them. The third one concerns Armenia-EU bilateral ties. This topic will be discussed in the context of the upcoming Eastern Partnership summit in November. The fourth one is the issue of preservation of Armenian identity in the European colonies.

-What is going to be the emphasis of the European Armenian Federation for Justice and Democracy on the Artsakh issue?

-The Artsakh issue remains one of the key priorities of the EAFJD – from political perspective the preservation of the Artsakh people’s right to self-determination in the OSCE Minsk Group agenda, in the lexicon of the representatives of various EU structures because according to the international law this principle has the same force and coercion as the principle of territorial integrity. The second issue over the Artsakh conflict is to counter geopolitical and economic isolation imposed by the Azerbaijani side to the Artsakh people. In this context we will continue intensifying the diplomatic ties with the European lawmakers by creating opportunities for them to visit Artsakh or cooperating with the parliamentary friendship groups. The consequence of the isolation is that the life quality of the Artsakh people, the economic development are being limited. The EAFJD voiced this issue at the recent conference on the OSCE human rights field which was held in Warsaw. Within the frames of this conference meetings were held with dozens of delegations, a film on the Artsakh war was screened.

-The Co-Chairs try to take steps on boosting the negotiation process. What are the expectations in this regard? Taking into account Azerbaijan’s unconstructive policy whether a positive progress is possible?

-The most important thing at this stage is the implementation of priorities registered during the Vienna and St. Petersburg meetings. If Azerbaijan continues violating the ceasefire, we can imagine that the actual negotiations will hardly move forward. Positive atmosphere for negotiations will be formed only when it is calm in the border. This will be possible in case of installing investigative mechanisms in the line of contact. This should be the immediate priority of the Co-Chairs. If Azerbaijan continues opposing, the Armenian side should discuss the issue of unilaterally installing these mechanisms.

-Recently some reporters investigating certain media outlets released details over the Azerbaijani corruption scandal. What was the reaction of European figures on this issue?

-The reaction was high and could further increase since the names of persons involved in this case are being gradually revealed. The European Parliament has already strictly condemned this and urged to form a commission to investigate the case. The European Parliament adopted a specific resolution which is quite positive. We think such initiatives must be made in the parliaments of all those countries where there are suspicions over the involvement of that countries political figures’ in this scandal. All those who participated in the Azerbaijani propaganda, carried out anti-Armenian actions by receiving Azerbaijani oil dollars should be punished. This is a guarantee of maintaining European values.

-Can you please present the stance of the EAFJD over the Catalonia independence?

-I firstly want to refer to the use of force during the referendum which doesn’t bring an honor to Spain. The violence we witnessed is against the European, democratic values and human rights. Every nation has the right to free will. This right must be preserved, respected and should not be taken by force.