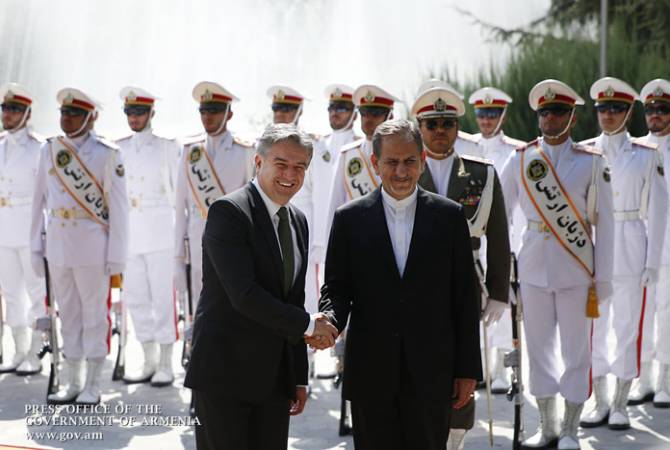 
YEREVAN, OCTOBER 9, ARMENPRESS. At the invitation of the First Vice President of Iran Eshaq Jahangiri Prime Minister of Armenia Karen Karapetyan has arrived in Iran on an official visit. As ARMENPRESS was informed from the press service of the Government of Armenia, following the official meeting ceremony at the Mehrabad airport in Tehran, the delegation led by Premier Karapetyan headed to Iran’s Royal Saadabad Palace where the meeting of Karen Karapetyan and Eshaq Jahangiri took place. 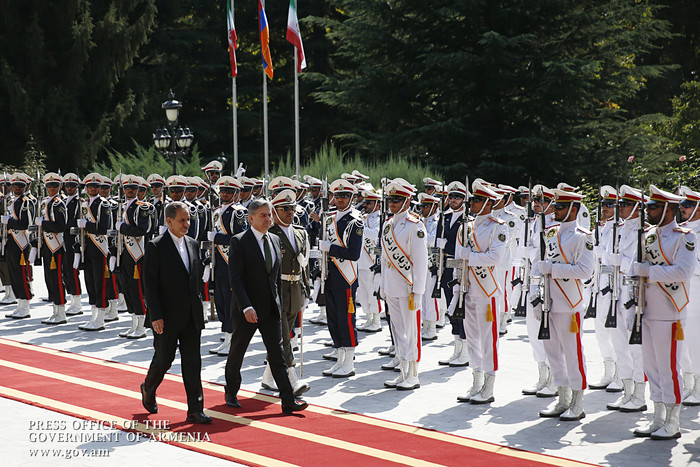 The Head of the Executive of Armenia thanked for the cordial reception and once again congratulated Eshaq Jahangiri on the re-appointment to the post of the First Vice President of Iran. The Armenian Premier highly assessed the close and friendly relations between Armenia and Iran that continue to develop in an atmosphere of mutual trust. “I am full of hope that after our meeting we will give new breath to our cooperation and all the programs on our agenda. Referring to economic cooperation I have to note that it’s significantly inferior to the high level political dialogue between our countries. But I am more than convinced that we will be able to record new achievements in the economic field of our cooperation”, Karen Karapetyan said. 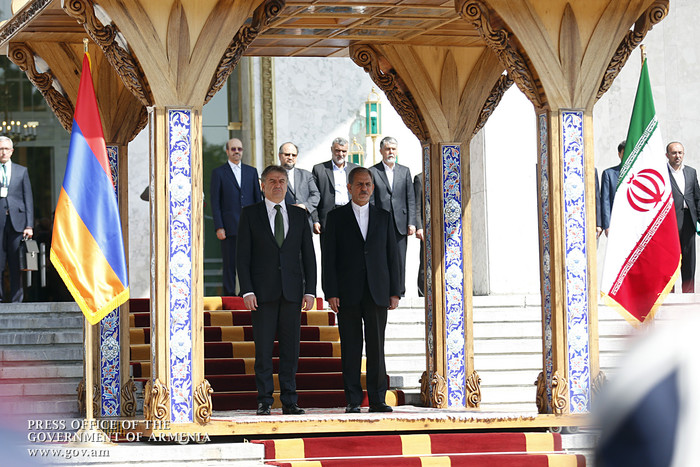 First Vice President of Iran Eshaq Jahangiri thanked the Armenian Premier for accepting his invitation and visiting Iran and highly assessed the current level of the interstate relations. Eshaq Jahangiri highlighted the continuous development of economic relations in various spheres between the two neighboring and friendly countries and expressed conviction that PM Karapetyan’s official visit will foster further activation and expansion of economic cooperation.

The Armenian Premier and the First Vice President of Iran assessed the construction of Iran-Armenia 400kw third power transmission line one of the important projects of bilateral economic agenda that will give an opportunity to add the gas-electricity exchange volumes. The sides also highlighted the implementation of Meghri HPP project. The role of “Syunik free trade zone” and its cooperation with Iranian “Aras” free trade zone was assessed as of key importance for the development of Armenian-Iranian economic and trade relations. “I am sure this free trade zone can be of interest for Iranian companies that would like to enter the EEU market or the European markets, since Armenia has been granted with GSP+ privileged trade regime, as well as for other companies that might have limitations for cooperation with Iran”, Karen Karapetyan said. 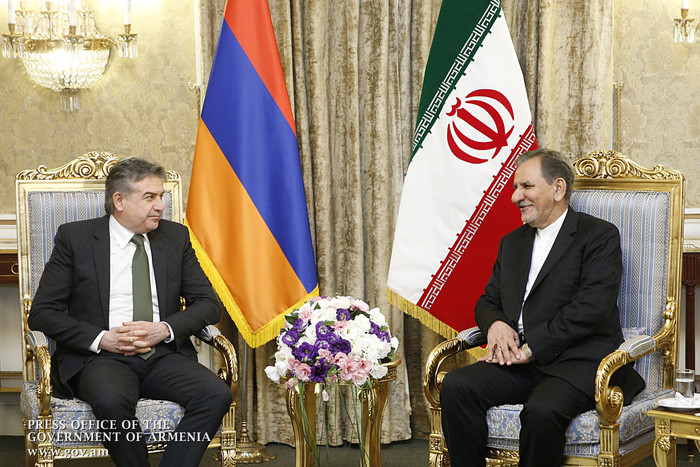 Following the tête-à-tête conversation between Karen Karapetyan and Eshaq Jahangiri an expanded format meeting took place during which cooperation prospects in different spheres were discussed.

The development of international transport corridors, multimodal transport and the possible participation of the Iranian side in the construction of some parts of North-South road corridor were assessed as important spheres for cooperation between Armenia and Iran.

Trilateral energy cooperation between Armenia, Iran and Turkmenistan was touched upon. Active cooperation between the customs agencies of the two countries was also highlighted. Premier Karapetyan informed that the Government of Armenia has initiated a project of modernization of Armenia-Iran border check point.

Referring to the talks on Iran-EEU FTA, the Head of the Executive of Armenia hoped that the process will come to end in maximally short period of time and said that the Armenian side is ready to support.

The sides shared the opinion that it’s necessary to activate the works of Armenia-Iran intergovernmental commission and agreed that the regular 15th session should be held in the near future.

The Armenian premier and the Vice President of Iran referred to regional developments. In this context Karen Karapetyan thanked the Iranian side for its balanced position on Nagorno Karabakh conflict.

Karen Karapetyan invited Eshaq Jahangiri to Armenia on an official visit which was accepted with pleasure. 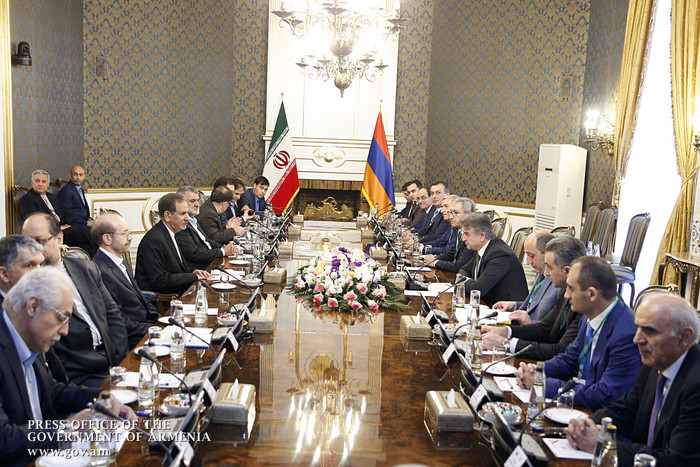 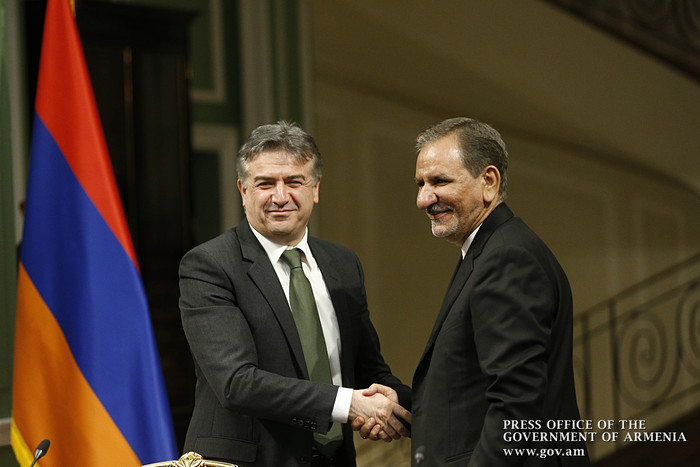 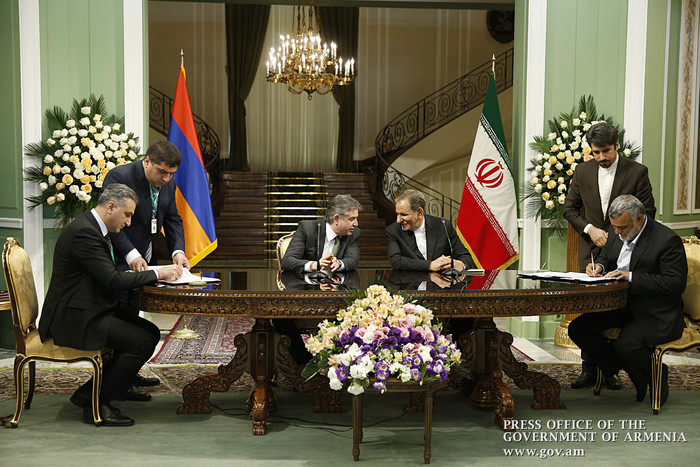