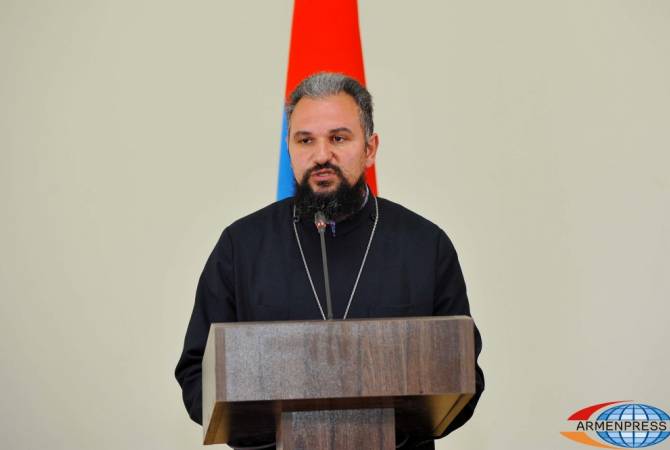 
YEREVAN, OCTOBER 3, ARMENPRESS.  In the recent days everybody’s attention is focused on Gumburdo village of Javakhk, Georgia, where clashes took place between Armenians and Georgian law enforcement authorities. The cause of the confrontation was the erection of an Armenian cross-stone. In connection with the incident ARMENPRESS talked to Father Vahram Melikyan, head of the Mother See's Press Service.

- In the recent period various news outlets, including foreign ones, refer to the incidents that took place in Gumburdo, presenting different reasons. What’s the real cause of the clashes in Gumburdo?

- What happened in Javakhk’s Gumburdo village is disappointing. The Catholicos of All Armenians and our people are deeply concerned over what has happened.

There were tombs in the vicinity of the church of Gumburdo village. Recently reconstruction works were carried out during which the tombs were ruined and the remains of the berried people were taken to another place together with the construction remains.

Leaning about this, the village residents put the remains in over 3 dozens sacks and re-buried near the church wishing to also erect a cross-stone in the place of the re-burial.

The erection of the cross-stone was prohibited by the law enforcement bodies of Georgia becoming the reason of this unpleasant incident and causing some tensions.

- What measures are taken to solve this undesirable situation?

-First of all, I would like to inform that the issue of the erection of the cross-stone has been presented to the attention of the Georgian side for a long time. In this connection discussions have been held with both the Georgian authorities and the representatives of the Georgian Church at the level of Armenian Diocese in Georgia. The issue was once again raised on September 22 at the Mother See during the meeting of the Catholicos of All Armenians and Minister of Culture and Monument Protection of Georgia Mikheil Giorgadze.

The Primate of the Armenian Diocese in Georgia continues meetings with the Georgian authorities and the representatives of the Georgian Church aimed at reaching a favorable solution and decreasing the tensions.

We hope that with the united efforts of the Georgian authorities, Georgian Orthodox Church and the Armenian Diocese in Georgia the issue will be solved and our compatriots in Gumburdo will be given the opportunity to display adequate respect towards their ancestors in accordance with their national tradition.