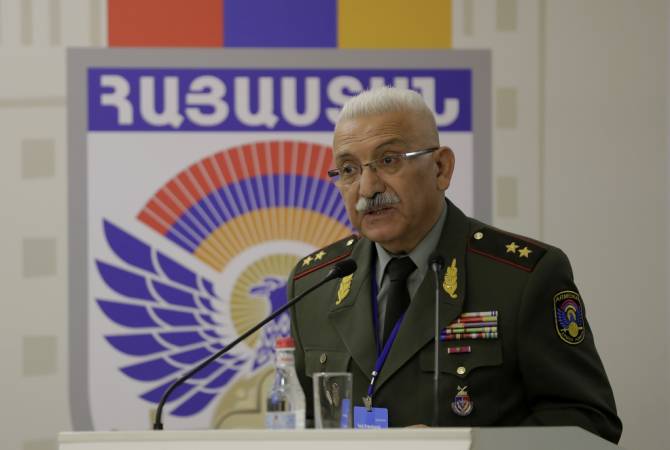 
YEREVAN, SEPTEMBER 19, ARMENPRESS. Lieutenant General Hayk Kotanjyan, Head of tha National Defense Research University of the Armenian defense ministry, Doctor of Political Science, Professor, delivered speech at the session on "The Peculiarities of the Armenian Defense Policy in Contemporary Challenges" of the 6th Armenia-Diaspora Pan-Armenian Forum being held in Yerevan on 18-20 September.

Armenpress presents the full text of his speech:

“The humanity steps into the fourth stage of scientific and technical revolution. It is characterized by the dominance of information and communication technologies in all spheres of the vital activity of the state, society and the individual, as well as overall digitalization and computerization of that activity. And thus, new unprecedented opportunities are created which also bring qualitatively new threats and challenges en masse. Particularly, cyber threats and cyber crime have acquired transnational nature with any spot of the world being vulnerable from some other spot, the physical borders of states being vanished, and attacks on states carried out instantly – at computer speed. Under such conditions, effective resistance to these threats is possible only through international cooperation. Therefore, each state ought to present itself as an interoperable one in order to establish partnership ties with other states.

The Republic of Armenia is constantly being exposed to military attacks by its belligerent neighbor. Those attacks have also transcended from the physical to the virtual space. Thus, the national security of Armenia and Artsakh is largely circumscribed by not only their traditional defense potential, but also cyber capabilities.

And the international cooperation appears to be one of the universal effective tools, which enables to enhance Armenia’s cyber capabilities via the targeted development of legal, institutional, technical and technological spheres, and key infrastructures, thus facilitating its ICT and cybersecurity provision and the growth of its attractiveness from the perspective of international partnership.

In terms of development of international cooperation, the RA military-political leadership does a tremendous work by establishing academic and technical ties, namely with the US advanced public and private organizations of this sphere. From this point, it is worthwhile to recall the Armenian delegation headed by then Deputy Defense Minister Ara Nazaryan visit the head office of the US “Microsoft” Corporation on 23-25 September, 2015, as well as its fruitful meetings with the company leadership, and in particular with Vice-President Vahe Torosyan, an intellectual from the Armenian Diaspora.

In this respect, the National Defense Research University, which has established close academic ties with the US advanced state academic-educational organization of the security sphere, i.e., the National Defense University, also boasts of its investment. Partnership in the cybersecurity is one of the key components of this multi-layer and multi-vector collaboration. In particular, a number of young NDRU professionals have been granted academic fellowships at the College of Information and Cyberspace (iCollege), which is the US center of excellence in the cyber sphere, and an important institution bridging the public and private sectors. Within the frameworks of this cooperation, our team of young professionals from the Center for National Security Policy and Communication and Information Technologies, Institute for National Strategic Studies, has elaborated the Armenian Draft National Cybersecurity Strategy,  which has undergone academic reviews in the above-mentioned college, as well as the relevant NATO body, and at the committee of the Armenian National Assembly, to be further published in the recent issue of “Haikakan Banak” (“Armenian Army”) defense-academic journal.

At present, the Center is developing a project on designing an innovative system for effective cyber space resources management in Armenia. Implementing this system implies the preparation of special officials for managing the given spheres on the basis of common knowledge, for which the “Cyber Space Resources Strategic Management” Master’s program is being concomitantly elaborated in the Center, anticipated to launch in autumn, 2018.

The collaboration with the US state center of excellence National Defense University College of Information and Cyberspace gives life to fruitful perspectives for developing and implementing effective mechanisms of the more advanced US model so as to facilitate the bridging of the cyber sphere public and private sectors in Armenia.

And this is where our Armenian Diaspora can play an extremely important role, since ensuring the cybersecurity is not merely a statewide, but a nationwide matter, the solution of which requires not only a targeted consolidation of human and material-technical, but also organizational and intellectual potential of the entire nation via exploiting the social weight and personal connections of authoritative Armenian figures. And one of the bright examples of this is the patriotic activity of Tony Moroyan, CEO, Viasphere International, Chairman, ArmTech Congress, Dr. Yervant Zorian, Chief Architect and Fellow at Synopsis, and other distinguished representatives of the Armenian Diaspora.

The active engagement and further enlargement of participation of the Diaspora Armenians create reliable prospects for the progressive development of Armenia’s cyber capabilities. This involvement is in our common national interests, as it endows our state with the ability to develop its cyber capabilities at the service of the entire nation, and at the same time to substantially strengthen Armenia-Diaspora ties, promoting the preservation of the national identity of the Diaspora.

In conclusion, I have the honor to appeal to our estimable cybersecurity leaders of the Diaspora with a call on the eve of the 100th anniversary of the re-establishment of the Armenian statehood, to provide practical assistance in the establishment of the above-mentioned Institute for Cybersecurity Resources Strategic Management targeted at the secure development of the Republic of Armenia”.