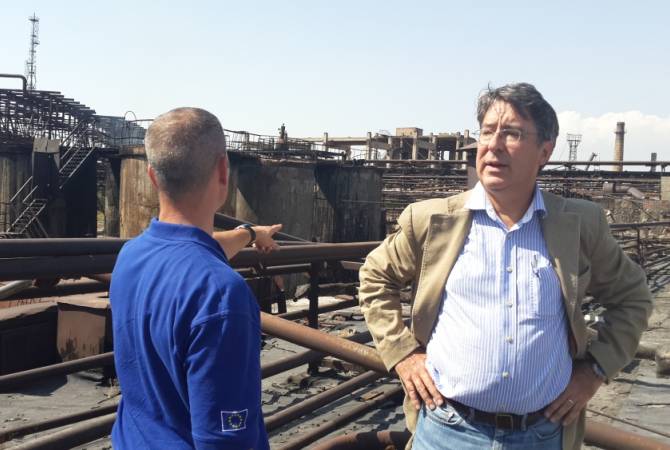 
YEREVAN, SEPTEMBER 13, ARMENPRESS. Bradley Busetto, UN Resident Coordinator/UNDP Resident Representative in Armenia, received the international experts’ team who have arrived to Armenia to assess the situation related to chemical hazards located at the Nairit plant in Yerevan, where a fire occurred on August 28, 2017, ARMENPRESS was informed from the UN Department of Public Information of the Yerevan Office. The visit is facilitated by the UN Office for the Coordination of Humanitarian Affairs (UN OCHA) through its partnership unit with the UN Environment Programme (UN Environment). The team of three international experts is deployed as a response to the appeal from the Government of Armenia, namely from the Minister of Emergency Situations, requesting support from the UN to assess the emergency matter.

The experts arrived in Armenia on Sunday 10 September and already met with Davit Tonoyan, Minister of Emergency Situations, and other ministry officials. They also met with the Nairit plant management and visited the factory site to assess the affected storages and understand how chemicals remaining on the grounds of the plant are managed.

The team discussed the mission objectives and plan of action with the UN Resident Coordinator, and shared their impressions of the situation on the ground. Mr. Busetto expressed gratitude for the prompt deployment of the team and confirmed UNCT support to the team throughout their mission in Armenia.

The team is mobilized through the UN Environment / OCHA Joint Unit (JEU), based in OCHA Geneva, which oversees the activation of international response mechanisms and subsequent deployments in case of environmental and/or industrial emergencies. The humanitarian donor community responded immediately to the appeal for technical support. Specifically, the European Union Civil Protection Mechanism was activated, deploying one Swedish and one French chemicals expert. The Swiss Agency for Development and Cooperation (SDC) additionally provided one chemicals expert from Switzerland for this assessment.

Over the next two weeks the mission will assess the risk associated with hazardous chemical substances in Nairit plant and will develop recommendations for the Government of Armenia on prevention and mitigation measures.

On August 28, a fire broke out on the territory of Yerevan Nairit chemical plant. The quantity and nature of the chemical substances burning allowed the fire to be rapidly localized by the Ministry of Emergency Situations, however, it took time before it was fully extinguished. The air monitoring service of the MES carried out regular air contamination monitoring on the site and in Yerevan, reporting that the level of the air contamination did not exceed hazardous limits.