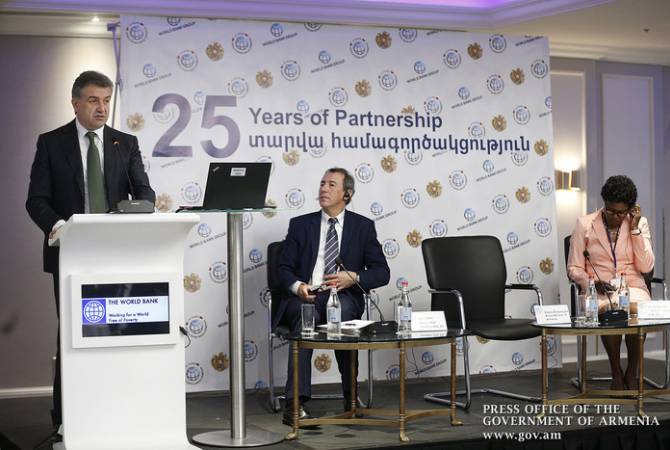 
YEREVAN, SEPTEMBER 11, ARMENPRESS. On September 11 Prime Minister Karen Karapetyan took part in the opening ceremony of the conference dedicated to the 25th anniversary of the partnership between Armenia and the World Bank, press service of the government told Armenpress.

In his welcoming remarks the PM said Armenia attaches importance to close and continuous partnership with the World Bank that has a development tendency. “The World Bank is one of the key partners of Armenia. We are successfully cooperating in all spheres of economy. During those 25 years a number of programs aimed at socio-economic development and forming modern institutions have been implemented in Armenia by the assistance of the World Bank. The tools provided by different structures of the World Bank Group helped to ensure economic growth, development and progress. Starting from 2014 we have entered a new development stage, by switching from the programs of International Development Agency to the programs of the International Bank for Reconstruction and Development. Currently the Armenian Government has initiated and implements a program aimed at making radical reforms in and modernizing our economy which requires mobilization of existing resources, increase of effectiveness of their use and closer cooperation with our major partners”, the PM said. He stated that the government’s program has been appreciated by Armenia’s partners and said with satisfaction that the main goals of the Armenian government and the World Bank are in line.

“Our ultimate goal to the future is to have an independent, safe, fair and smart Armenia. The future’s creation of Armenia like this should become a key pillar of cooperation between Armenia and the World Bank. The WB extensive experience and the knowledge base will assist the government to ensure decades of progressive development by effective and smart use of resources and increase of competitiveness. From this perspective the assistance provided by the World Bank over the past 25 years is very impressive: 95 programs have been initiated the financial flow of which amounted to 2.3 billion USD. At the moment the Bank’s loan portfolio in Armenia is around 620 million USD”, Karen Karapetyan said.

According to PM Karapetyan, in the circumstances of global economy a modern competitive economy and effective public administration are necessary for tackling the current challenges, and in future those economic systems can record success which will be able to change the model of economic growth and ensure progressive, stable, long-term economic growth.

“To build our future, ensure our security it is necessary to have a developed, competitive and innovative economy. The economy of the 21st century should develop thanks to dynamic digitization, smart adaptation to the environment. This will be possible only in case of modern, globally competitive, highly qualified and motivated labor force. The base of future Armenia must start from school and continue constantly”, the PM said. He expressed confidence that the participants both from the WB team and Armenia will continue with joint efforts to serve at best their experience and knowledge for the implementation of the vision of future Armenia.