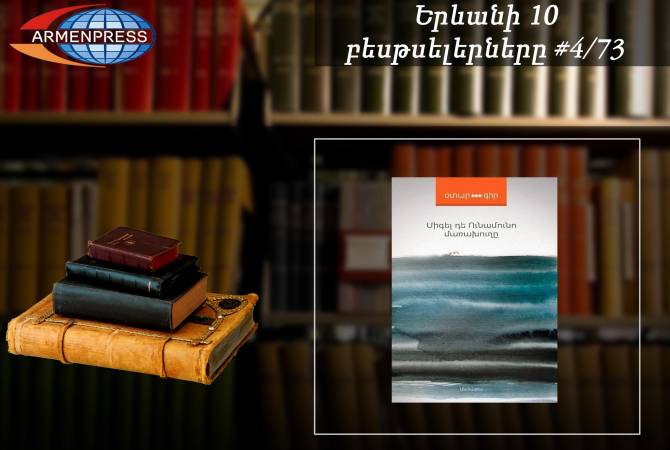 Like the previous week, this week as well Mark Aren’s ‘Where Wild Roses Bloom’ is ranked 2nd.

Stefan Zweig’s ‘Collected Stories’ comes next. Zweig was an Austrian novelist, playwright, journalist and biographer. At the height of his literary career, in the 1920s and 1930s, he was one of the most popular writers in the world. The book was translated by Ara Arakelyan and Margarit Arakelyan.

Alexievich is a Belarusian investigative journalist and non-fiction prose writer who writes in Russian. She was awarded the 2015 Nobel Prize in Literature "for her polyphonic writings, a monument to suffering and courage in our time". She is the first writer from Belarus to receive the award.

‘The Alchemist’ by Brazilian writer Paulo Coelho is 6th.Originally written in Portuguese, it became an international bestseller translated into some 70 languages as of 2016. An allegorical novel, The Alchemist follows a young Andalusian shepherd in his journey to Egypt, after having a recurring dream of finding treasure there.

‘Dandelion Wine’, 1957 novel by Ray Bradbury this week is ranked 7th. The novel is taking place in the summer of 1928 in the fictional town of Green Town, Illinois, based upon Bradbury's childhood home of Waukegan, Illinois. It was translated from English by Zaven Boyadjyan.

Francis Scott Fitzgerald’s ‘The Great Gatsby’ is the next in the bestselling list. It was first published in 1925, and is considered one of the typical works of American literature of the "jazz era".

‘1984’ by George Orwell ranks the 9th in the list. The book is labeled as “banned” in many countries of the world.

Miguel de Unamuno’s novel ‘Mist’ concludes this week’s bestselling list. The plot revolves around the character of Augusto, a wealthy, intellectual and introverted young man. He falls in love with a young woman named Eugenia as she walks past him on the street, and he sets about trying to court her. He is aided in his efforts by the other members of Eugenia's household. Her aunt is particularly keen for a relationship to evolve, so that Augusto might help with her niece's financial troubles. Nevertheless, Eugenia rejects his advances, since she is already in a relationship with the down-and-out Mauricio. Augusto pays off Eugenia's mortgage as a goodwill gesture without her knowing, but this only serves to insult Eugenia, rather than endear her to him.