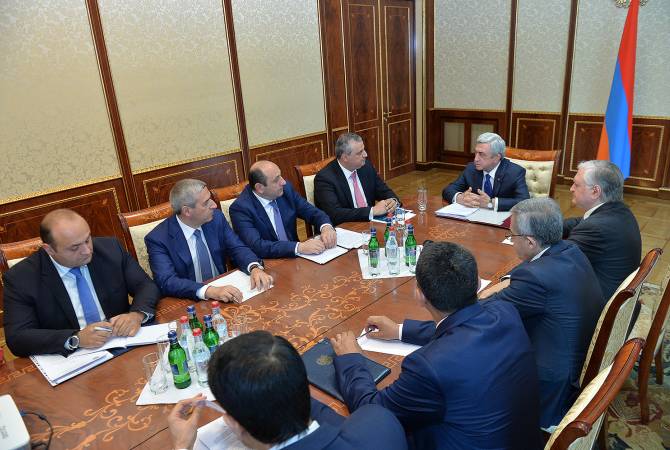 
YEREVAN, JULY 14, ARMENPRESS. Within the frames of meetings held by President Serzh Sargsyan dedicated to the economic component of Armenia’s foreign policy, the trade-economic relations between Armenia and the United States, their development dynamics and prospects were discussed during the July 14 meeting, press service of the President’s Office told Armenpress.

During the meeting Armenia’s Ambassador Extraordinary and Plenipotentiary to the US Grigor Hovhannisyan reported on the Armenian-American bilateral ongoing programs and achievements, targeted directions for development of mutual partnership, short-term and medium-term goals in several prospective fields and the Embassy’s works towards their implementation.

At the beginning of the meeting, Serzh Sargsyan said this year Armenia and the US celebrate the 25th anniversary of establishing inter-state relations and stated that during these years both countries have established firm partnership ties. Armenia and the United States cooperate in numerous spheres, and thanks to this cooperation today a high level of mutual understanding exists between the two countries.

“Since Armenia’s independence, the US has always provided assistance, and the technical and humanitarian aid provided by the US Government to Armenia over those years reached almost 2 billion USD. This is a serious investment given the fact that the US has always assisted us in our reforms. The assistance gradually turns into economic cooperation, and today more than 800 companies with participation of American capital operating in Armenia have significant contribution in this process. I think our cooperation with Contour Global in energy field must serve a good example for other energy companies. Lydian International as well makes serious investments which also can serve as a good example for cooperation.

Of course, the cooperation in IT field has long been formed, and what we have today in this field is appreciated, but the potential is much more.

I also want to appreciate the useful activity of the USAID in Armenia which during these years has always assisted the reforms. Of course, we must not forget about the activity of the American University of Armenia which as well has close connection with economy, it is a good center of preparing cadres. Here it is important to note that the university is constantly developing.

Nevertheless, as in all relations, we are still not satisfied with the level of today’s relations: there is a great potential for development taking into account the US economic development level, its readiness and, of course, the presence of the Armenian community having great potential there.

Mr. Ambassador, I would like you talk about the work which is carried out in economic partnership field, and also about the programs which will boost development”, the President said.

During the meeting the figures presented in the report of the Ambassador, the existing problems and the steps aimed at solving them were discussed.

The meeting was also attended by heads of concerned ministries and agencies.