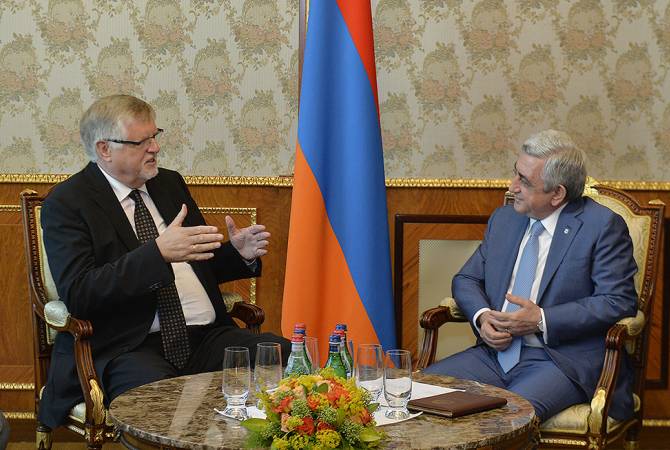 
YEREVAN, JULY 6, ARMENPRESS. President of Armenia Serzh Sargsyan held a meeting today with Herbert Salber, the EU Special Representative for the South Caucasus and the crisis in Georgia, who will soon leave his present office for another work.

The president thanked Mr. Salber for his efforts during his tenure and wished good luck in his new activities.

The sides touched upon that Armenia-European Union relations and the prospect of further developing the cooperation.

The president and the EU special representative assessed the level of the ties highly.

During the meeting the president thanked the EU for assistance through its regional Madad foundation to Syrian-Armenians to have found refuge in Armenia.

The sides also discussed the process of the peaceful settlement of the Nagorno Karabakh conflict and the latest developments in the conflict zone.

The president found it to be concerning that Azerbaijan is continuing its provocative policy by increasing the tension and ignoring the calls of the OSCE Minsk Group co-chairs.

Mr. Salber stressed that the EU continues to find that the conflict’s peaceful settlement has no alternative, and it is necessary to make efforts to avoid escalation and pave the way for the negotiations process.