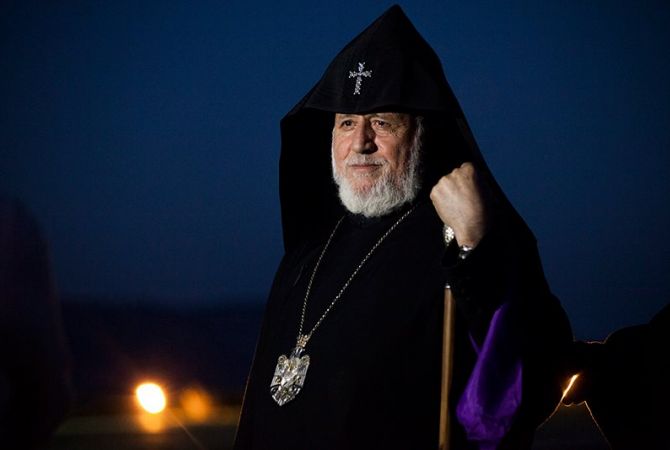 
YEREVAN, APRIL 13, ARMENPRESS. His Holiness Garegin II, Supreme Patriarch and Catholicos of All Armenians, responded to ARMENPRESS inquiry commenting on the statement of Sheikh-ul-Islam Haji Allahshukur Pashazadeh, Chairman of the Caucasian Muslims Council, according to which a trilateral meeting is being prepared.

-Your Holiness, Chairman of the Caucasian Muslims Council Sheikh-ul-Islam Haji Allahshukur Pashazadeh yesterday in his interview talked about the possible trilateral meeting. To what extent is this information true?

-You know that from the first day of the beginning of the Karabakh conflict, our predecessors, then we held regular meetings with Azerbaijan’s spiritual leader Allahshukur Pashazadeh under the mediation of patriarchs of Moscow and all Russia, with the aim of contributing to the peaceful settlement of the conflict through joint efforts. We have held 5 such meetings during our enthronement.

-Yes, at the moment by the mediation of Patriarch Kirill, a trilateral meeting is being planned. The meeting dates are not known yet: the sides are working on deciding the date and agenda of the meeting.

-Of course, Allahshukur Pashazadeh is free to raise any issue, which he often does yielding to the demands of Azerbaijani propaganda machine.

It is a historical fact that, in contrary to the Azerbaijani side which destroys any monument or holy place containing an Armenian trace, such as the destruction of thousands of Armenian cross-stones in Julfa, elimination of book repository of the Armenian church in Baku, demolition of our monasteries and churches in Nakhchivan, the leadership of Artsakh maintains and restores their historical heritage in the Artsakh land, as well as holy places and monuments belonging to other religions.

Instead of expressing satisfaction over restoration of Shushi’s mosque, the resistance of  Azerbaijan’s spiritual leader and his justification over this is unperceivable for us. It would be fair and honest to express it over the barbaric acts committed against Armenian holy places and monuments in his own country.