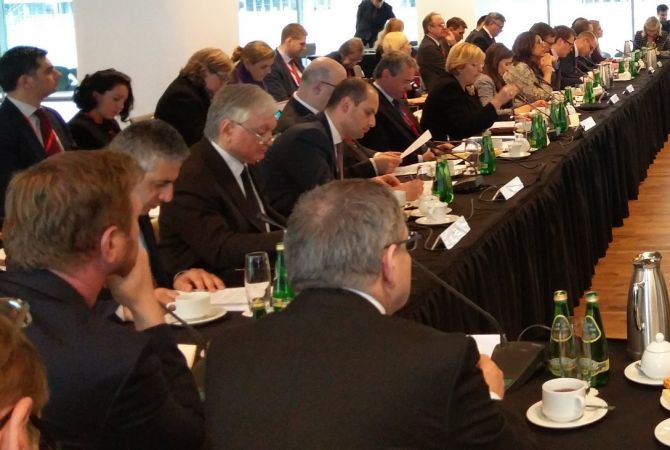 The meeting was attended by Foreign Ministers of other EU states, EU Commissioner for European Neighbourhood Policy & Enlargement Negotiations.

During the session FM Nalbandian delivered speech which says:

I would like to thank the Visegrad 4 Polish Presidency for hosting this ministerial meeting.

Approaching the upcoming Summit in Brussels with tangible achievements will be important for the future of the endeavors within the Eastern Partnership. In this regard we appreciate the initiative to give a political push to our sectoral cooperation and focus the debate on infrastructure connections, since it is one of the priorities of the Eastern Partnership enshrined in the Riga joint declaration.

On March 21st Armenia and the EU have initialed the Comprehensive and Enhanced Partnership Agreement that will reflect the depth and essence of our relations and set new guidelines for enhanced partnership.

Interconnectivity occupies a solid place in the Framework Agreement, as well as in the Armenia-EU Partnership Priorities for 2017-2020, underlining its importance not only for the bilateral relations, but also in the context of the regional cooperation.

Together with the EU and other partners, we are involved in different interconnectivity projects. We welcome the decision to extend the Trans-European Transport Network to the Eastern Partners. Last year, Armenian and Georgian principal highways were included as core connections on the comprehensive network of TEN-T maps.

Another good example is the Armenia-EU negotiations that started a month ago to conclude the Common Aviation Area Agreement.

The European Union, through the European Investment Bank, contributes to the realization of the one of Armenia’s strategic projects – the construction of the North-South road corridor that crosses the country with 556 km-long modern highway.

The recent modernization of Armenia-Georgia border crossing points with the support of the European Union is a practical step towards implementation of the Eastern Partnership Integrated Border Management Initiative. It provides more efficient capacities for increased volumes of transit and trade.

Interconnectivity does not limit only to transport communications. The European Union through the Neighborhood Investment Facility has contributed to the construction of a new Armenia-Georgia high-voltage transmission lines.

Ensuring mobility and people-to-people contacts are essential for enhancing the connections between our societies. This was one of the core principles set into the foundations of the Eastern Partnership. One of the ways to realize this commitment and to bring our societies closer is the visa free regime. Armenia and the EU for the past three years have been actively implementing the Visa Facilitation and Readmission Agreements. The next step is the visa liberalization dialogue as targeted in the Riga Summit Declaration.

Through connectivity and economic cooperation we can effectively foster growth and stability in the region at large. It is essential that we consider the notion of connectivity in a broader context, not only among EU and EaP countries but also between different integration formats.

The links between the European Union and the Eurasian Economic Union should be a matter of pragmatic and result oriented dialogue. Armenia as a member state of the EAEU and one of the Eastern Partnership countries is ready to contribute to this end.

Promoting the connectivity and strengthening economic cooperation can help to forge common interests and joint projects that bring mutual benefits. In this regard they should also be viewed as confidence building measures and should be considered as a strong tool within the context of the efforts of agreed formats of the conflict resolutions.

I would like to use this opportunity to thank the European Union for significant financial and technical assistance in support of organizing a free and fair parliamentary elections in Armenia in the beginning of April. After the elections the European Union stated that they were well administered, fundamental freedoms were generally respected, and that the result reflected the overall will of the Armenian people. The EU further stressed its willingness to work with the democratically elected new Parliament and Government.

Armenia is also looking forward to continue its close cooperation with the European Union”.