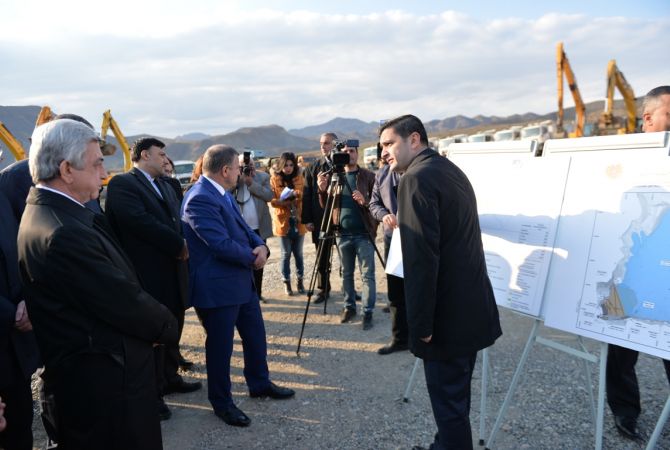 
YEREVAN, MARCH 28, ARMENPRESS. In the sidelines of the working visit to Ararat Province, President of Armenia Serzh Sargsyan attended Vedi reservoir’s groundbreaking ceremony which was also attended by the Deputy Premier and Minister of International Economic Integration and Reforms, Ararat Governor, Chairman of the Water Resources State Committee, Ambassadors of France and Iran, Chairman of the South Caucasus Office of the French Development Agency (AFD) and other officials.

The Vedi reservoir will be the first in the years of Armenia’s independence that will be constructed from the fundament.

Experts briefed the President that the reservoir’s capacity will be 29.4 million cubic meters.

The 90 million Euro project is being implemented by the credit allocated by the French Development Agency and co-funding of the Armenian Government. The construction works will be finished in March, 2021.

The President was also briefed that during the 4 years of the implementation of the project 250 new jobs will be created with 220-250 thousand AMD average salary.