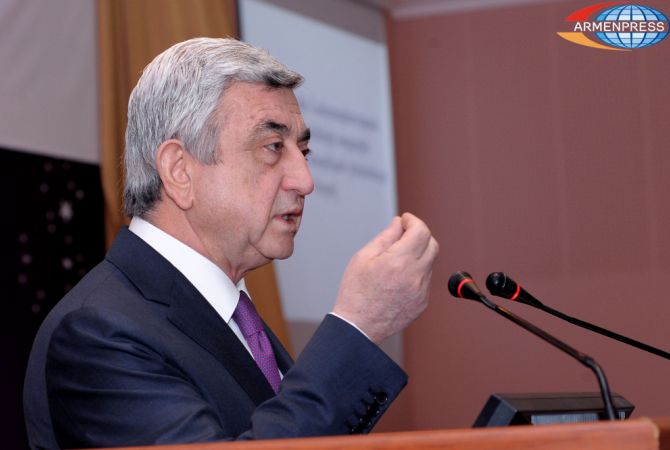 During the presentation of the annual report of the chairmanship of the National Academy of Sciences, commenting on the concerns of the Academy members who said there are rumors that the Academy has exhausted its mission, the President stated that he doesn’t share this stance.

“Of course, I don’t share this view since if I did it, we would take steps on that path long time before. I support that those institutions, which are left on paper, must be optimized. They must be real. I think that where there are less people there are no opportunities and results, those places must be optimized and the wider parts must be strengthened that work and develop science in Armenia. There was absolutely no any approach from us and there is no such approach”, the President said.

He called on the Academy members to be initiators. “It is not a secret for anyone that there are divisions of the Academy that are not working effectively. The talk must concern this. I don’t see any option. Yes, there must a close cooperation between the National Academy of Sciences and our educational institutions. Of course, the university science must as well develop, but I think it’s wrong to separate them, and I don’t accept the views that the Academy completed its mission”, President Sargsyan said.

In response to concerns of the Academy members who said that some people criticize the Academy in the media, President Sargsyan said in our public no one can avoid criticism.

“I think that in the country the most criticized structure is the Presidential residence, and I am the most criticized person. No one enjoys that criticism. However, one can always find a merit in those criticism that are not full of evil and are directed towards improving the works”, he said.

He urged not to be surprised that many people comment on topics in the media they know nothing about them. He said this is the cost we pay on the way of transforming from close to open society. “And don’t think that this approach is not only in terms of the Academy or science. If we now consider this period, since such phenomena are vividly demonstrated during the pre-election period, people speak about topics over which they have no idea. Be tolerant, show activeness, speak about achievements. This is the second issue since many don’t want to publicly contradict to people who really know nothing about the topic, but they speak about it. But if we want to support our view, we must do it. If we want this period to last shorter, we ourselves must show principled stance and express our opinion”, President Serzh Sargsyan said.