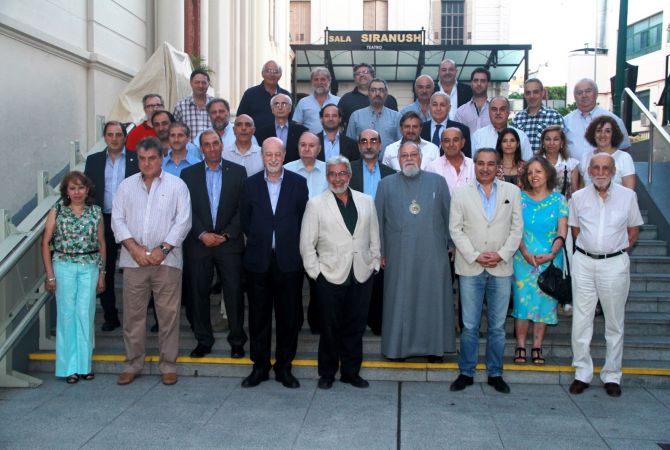 
YEREVAN, DECEMBER 30, ARMENPRESS. The institutions of the Armenian community in Argentina signed yesterday an agreement to create an entity with aim of better structuring and coordinating community joint efforts. The initiative was based on the successful experience of the commemoration of the Armenian Genocide Centennial, Prensa Armenia reports.

Professor Khatchik DerGhougassian, who was one of the two representatives of the Argentine-Armenian community that coordinated the activities with the Armenian Genocide Centennial State Committee in 2015, said: "We have given an important step towards the institutionalization of the space for a better coordination of the activities of the institutions of the Armenian community. This is not yet a representative body but it definitely opens the path to reach that goal in the near future."

The document that the institutions of the working group signed was a first step. It included six principles known as a Basic Consensus, which will be sent to all the other institutions. Any institution in any part of Argentina that gives its official agreement to adhere to these principles will have its place within the structure described as "open, democratic, inclusive and horizontal." Meanwhile, the group will continue to work on an official name, a working mechanism and a protocol of rules of conduct. "It is a work in process, they said, and we will proceed step by step listening to any healthy criticism and suggestion that any institution can make to improve the project."

The six principles of the Basic Consensus are the following:

A) The demand for moral and material restitution of the consequences of the Armenian Genocide of 1915 and 1923 of Turkey as an heir to the Ottoman Empire responsible for the organization and implementation of the crime against humanity.

B) The repudiation of any attempt to silence, forget, question, deny, relativize or trivialize the Armenian Genocide.

D) The evaluation of the historical role of the Armenian Apostolic Church, without any prejudice to the valuable contribution of other religious denominations or freedom of consciousness of each individual.

E) Respect for the role of community institutions as spaces for the preservation, development and dissemination of Armenian cultural values.

F) The prioritization of the education as the main factor for the formation, enrichment and development of the Armenian identity in its permanent and dynamic interaction within the social and cultural context of the country.