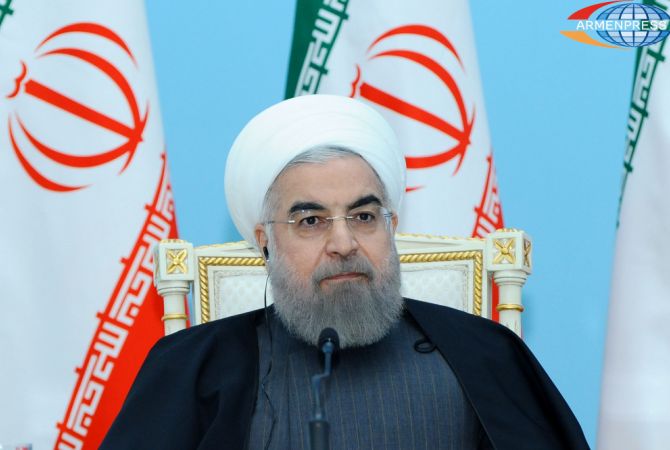 “Our peoples have always lived together within millenniums and are under one common civilized unit. Within the frames of Iran’s current Government’s activity, the relations of the two states have achieved progress. We had an opportunity to host Armenian President Serzh Sargsyan in our country after the Presidential elections, and I have always had a wish to visit in Armenia. I am happy that today I am here in your country”, the Iranian President said.

He said Iran and Armenia has a great cooperation potential. “Some part of that potential is already being utilized, and the remaining part must be used in the upcoming months and years. Especially in the energy field we witness a very close cooperation between the two countries. We must make efforts aimed at further deepening that cooperation”, Rouhani said, adding that the works on connecting the Persian Gulf with the Black Sea must be completed. “We must have a route connecting the Persian Gulf to the Black Sea through a railway. By this we will create favorable conditions for our people, as well as those of other regions”, he said.

“We have good cooperation in educational and scientific sectors. By using the daily technological opportunities, we manage to continue the close cooperation on that path”, the Iranian President said.

Within the framework of regional integration processes, Iran is trying to use the opportunities provided by Armenia’s membership to the Eurasian Economic Union. Hassan Rouhani said Iran is taking steps on signing free trade agreement with the EAEU.