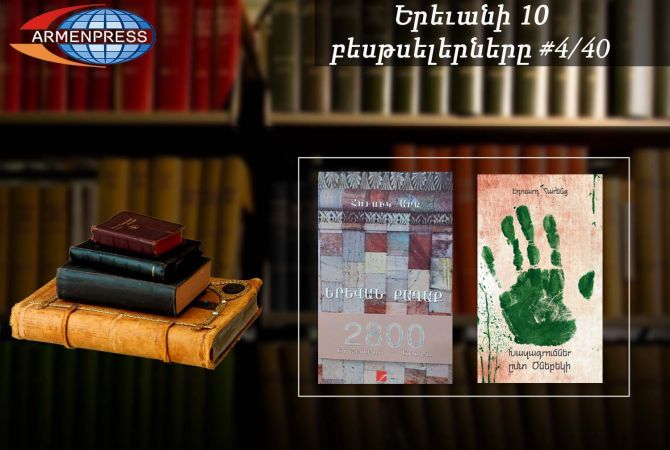 
YEREVAN, DECEMBER 9, ARMENPRESS. “Scratch writing by Asparagus” by Eduard Harents leads the list of YEREVAN BESTSELLER project of ARMENPRESS. The book shows the endless opportunities of the Armenian language.

Another new book Husik Aray’s “Yerevan city” enters the list dedicated to the memory of a real Yerevan resident Mher Davoyan with whom the author recognized, revealed and loved Yerevan. The book is ranked 2nd in the list.

“The Picture of Dorian Gray” by Oscar Wilde takes the 3rd position in the list. Dorian Gray is the subject of a full-length portrait in oil by Basil Hallward, an artist who is impressed and infatuated by Dorian's beauty; he believes that Dorian’s beauty is responsible for the new mode in his art as a painter. Through Basil, Dorian meets Lord Henry Wotton, and he soon is enthralled by the aristocrat's hedonistic worldview: that beauty and sensual fulfillment are the only things worth pursuing in life.

Mark Aren’s “Where wild roses bloom” comes next. This is the second novel of the author which describes the inner world of an Armenophobic Turkish former serviceman, when he, already an old man, suddenly hears a lullaby song that reminds him of his mother and later finds out that the song is in Armenian: realizing his parents were Armenians. The same former serviceman spends his remaining life searching the graves of his parents, without knowing that it was a misunderstanding.

The fifth position in this week’s ranking is “Who Moved My Cheese? An Amazing Way to Deal with Change in Your Work and in Your Life”.  Published on September 8, 1998, it is a motivational business fable. The text describes change in one's work and life, and four typical reactions to those changes by two mice and two "little people," during their hunt for cheese. A New York Times business bestseller upon release, Who Moved My Cheese? remained on the list for almost five years and spent over 200 weeks on Publishers Weekly's hardcover nonfiction list. It has sold more than 26 million copies worldwide in 37 languages and remains one of the best-selling business books.

“Art of Devotion or Ode to Rose” by photographer and writer Edgar Harutyunyan is ranked 6th in the list.

Narenk Galstyan’s “Akhparner” (meaning brothers in Western Armenian) is ranked 8th. This is the author’s first novel, which presents a history of a family who survived the Armenian Genocide. The book was published by “Antares” publishing house.

Adolfo Bioy Casares’ “The Invention of Morel” is in the 9th position. Set on a mysterious island, Bioy's novella is a story of suspense and exploration, as well as a wonderfully unlikely romance, in which every detail is at once crystal clear and deeply mysterious.

"The Library of Babel" by Argentine author and librarian Jorge Luis Borges (1899–1986) concludes this week’s list. It is a short story , conceiving of a universe in the form of a vast library containing all possible 410-page books of a certain format and character set.