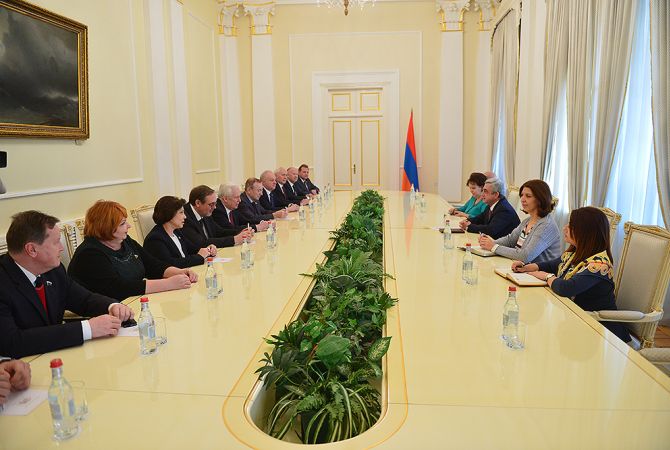 
YEREVAN, NOVEMBER 11, ARMENPRESS. President of Armenia Serzh Sargsyan received on November 11 the delegation led by Co-chair of the Inter-Parliamentary Commission on Cooperation between the National Assembly of the Republic of Armenia and the Federal Assembly of the Russian Federation Nikolai Ryzhkov, who is in Armenia on the occasion of the regular session of the inter-parliamentary committee  held in Yerevan on November 10.

As “Armenpress” was informed from the press service of the Armenian President’s Office, the President of the Republic greeted the guests and stated that he has no doubts the Yerevan session of the inter-parliamentary committee went on in a constructive atmosphere like the previous session, and issues of bilateral interest for further strengthening Armenian-Russian partnership were on the agenda of the discussion.

The interlocutors expressed satisfaction over the fact that thank to the years of activity of the inter-parliamentary committee Armenian-Russian relations have taken a stable and dynamic nature. President Sargsyan also highly appreciated the multi-dimensional partnership between Armenia and Russia.

The parties both stated the importance of consistent deepening of strategic partnership between the two states in all directions.

Nikolai Ryzhkov thanked President Sargsyan for hosting his delegation and the productive discussions that traditionally take place after the Yerevan sessions of the inter-parliamentary committee. He introduced to the President the agreements and future plans reached and defined during the session of the committee. Acknowledging that Russia has special relations with its strategic ally Armenia, the Co-chair of the Armenian-Russian Inter-Parliamentary Commission assured that the parliaments of the two countries have done everything within the format of the committee to ensure continuous strengthening and deepening of bilateral inter-state relations.