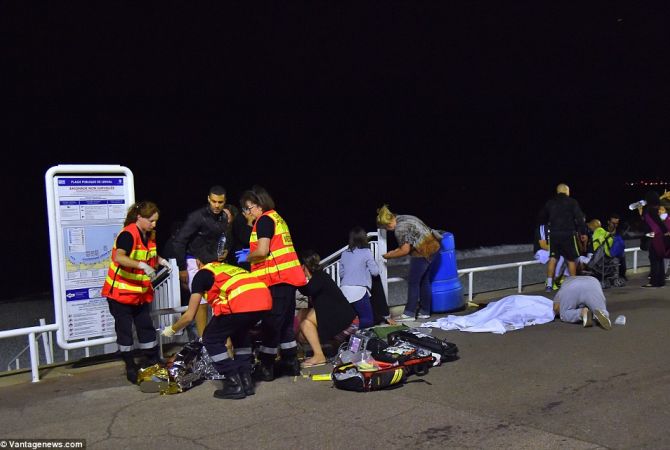 
YEREVAN, JULY 15, ARMENPRESS. The Foreign Ministry of Armenia informs about the death of second Armenian citizen in the terror attack in Nice, France, reports “Armenpress”.

“We inform with sorrow about another Armenian citizen died in Nice”, the MFA’s statement says.

Earlier the MFA of Armenia informed that an Armenian citizen has been killed in the July 14 terrorist attack in Nice, France. “Details are being clarified. The Armenian Consulate General in Marseille is in contact with the family of the victim for providing necessary assistance”, the MFA said.

Scores of people were killed Thursday night when a large truck plowed through a Bastille Day crowd in Nice, France, in what President Francois Hollande called a terror attack.

Hollande recommended that an existing state of emergency, put in place in the wake of the Paris attacks in November 2015 and due to expire later this month, be extended for three further months.

The French Interior Ministry reported about 84 people being dead and 18 in critical condition.

The driver opened fire on people in the crowd, according to local reports. Police fired back and the driver was eventually shot dead. Images from the scene showed the windscreen and front of the lorry raked with bullets. Interior ministry officials said the attacker had been "neutralized".

The perpetrator of the attack is Mohamed Lahouaiej Bouhlel, a 31-year-old French Tunisian.

16:31, 06.30.2022
1963 views Statements of Turkish officials that they coordinate the process with Azerbaijan are strange – Armenia’s Special Envoy