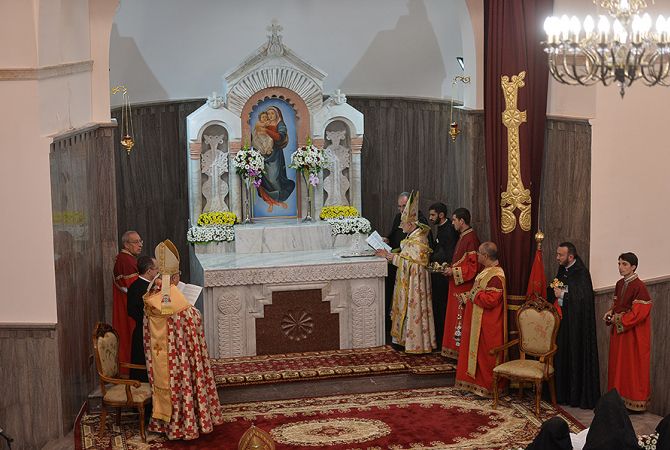 
YEREVAN, JUNE 23, ARMENPRESS. The choice of His Holiness Pope Francis to stop at Gyumri in the sidelines of his visit to Armenia is not accidental: the city is Diocesan not only for the followers of the Catholic Church of Armenia, but also of Georgia, Russia and Eastern Europe.

Nearly 10 thousand followers of the Catholic Church live in the rural communities of Shirak Province. That number for Gyumri city is difficult to count, but as the Primacy mentions, that number can reach 20 thousand. There are 9 Catholic Churches operating in the Province. Panik village has the greatest Catholic followers, 2880 believers, the next one os Arevik village with 1709 believers.

As “Armenpress” was informed from the Primacy, the Catholic Diocese of Armenia, Georgia and Russia was established in 1991 by Pope John Paul II. Archbishop Nerses Ter-Nersesian spearheaded the Diocese of Armenia, Georgia, Russia and Eastern Europe until 2005 and died on December 24, 2006.  In 2005, a year before his death, Pope John-Paul II replaced Ter-Nersisian because of his age and appointed Archbishop Nshan Garakeheyan, who served as the leader of the Diocese until 2010. Inaugural ceremony took place at St. Gregory the Illuminator of Arevik village of Shirak Province.

Pope Benedict XVI appointed Archbishop Raphael Minasian as the new head of Armenian Catholics in Armenia, Georgia, Russia and Eastern Europe in 2011, who leads the Diocese up till today.

Though Gyumri was a Diocesan city, the Primacy had no church for over 90 years. The ceremonies were held in a chapel. The old Catholic Church, built in 1843-1855, is partially preserved in the city. It was damaged by an earthquake in 1926 and later served as a shelter for homeless the offsprings of whom are still living there. The construction of an Episcopal residence took place in 2010. The official consecration ceremony of the Holy Martyrs Armenian Catholic Church took place on September 24, 2015. Representative of the Pope, Prefect of the Congregation for the Eastern Churches Cardinal Leonardo Sandri visited Armenia to participate in the ceremony.