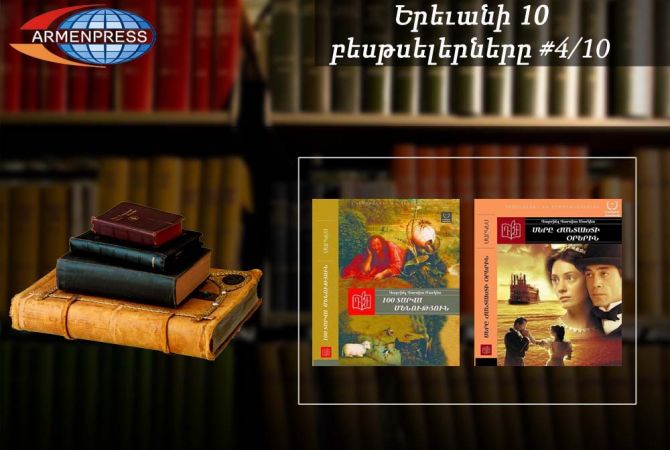 
YEREVAN, APRIL 29, ARMENPRESS. Oscar Wilde’s “The Picture of Dorian Gray” tops this week’s “Yerevan Bestseller” list of “Armenpress”. It is one of the most popular novels in the world.

Mark Aren's "Where the Wild Roses Bloom” is 2nd in the list. This is the second novel of the author which describes the inner world of an Armenophobic Turkish former serviceman, when he, already an old man, suddenly hears a lullaby song that reminds him of his mother and later finds out that the song is in Armenian: realizing his parents were Armenians. He spends the rest of his life searching for the graves of his parents, without knowing that it was all a misunderstanding.

"One Hundred Years of Solitude" by Gabriel García Márquez is 3rd.

“Love in the Time of Cholera" by Márquez comes 4th. “People are not always born the day their mothers bring them to the world: Life forces them to be reborn many times”, this is the philosophy of the novel.

“1984" by George Orwell is 5th in the list. The book is up to this day considered a banned book in many countries.

“Who Moved my Cheese” by Spencer Johnson is 6th. This book among the most read books in the world.

“The Autumn of the Patriarch” by Gabriel Garcia Marquez comes next.

“The Alchemist" by Paulo Coelho is ranked 8th. According to AFP, it has sold more than 65 million copies in 67 different languages, becoming one of the best-selling books in history and setting the Guinness World Record for most translated book by a living author.

Many questions of the Armenian reality of the 90s are still unanswered. And to answer some of those questions would be better off with silence. Hrachya Saribekyan’s “Journey of Idiots” brings up some of those “silenced” topics. For example, what happened to the Armenian patients of the psychiatric clinics of Baku and other Azeri cities? Thus, the journey of the novel’s characters is a unique trip for the readers as well.

William Golding’s “Lord of the Flies” is last but not least. The novel is regarding as one of the best works of the author.