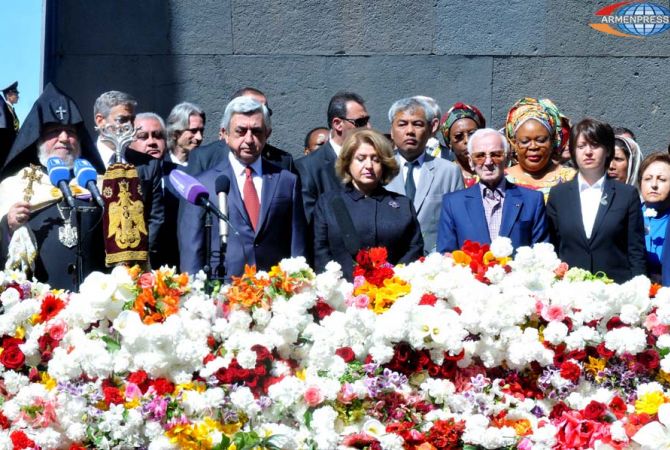 Renowned French-Armenian singer Charles Aznavour, world famous Hollywood actor George Clooney, nominees and participants of the “Aurora Awards” and “Against the Crime of Genocide” Global Forum , including genocide survivors were present at the ceremony.  As “Armenpress” reports, His Holiness Catholicos Garegin II delivered a liturgy and officials paid homage to the 1.5 million Armenian Genocide victims with a moment of silence.

Commemoration ceremonies are held throughout the whole world in Armenian communities and in all regions of Armenia on April 24. The Turkish denial policy is protested against and the international community is urged to recognize the greatest crime of the 20th century, thus preventing the recurrences of genocides.

Memorial services are held in all Dioceses of the Armenian Apostolic Church.

In 1915, the crime perpetrated by the Ottoman Empire against the Armenians was the first genocide of 20th century.

The Armenian Genocide was masterminded and perpetrated by the government of Young Turks in different regions of the Ottoman Empire.

The first international response to the violence resulted in a joint statement by France, Russia and the Great Britain on May 24, 1915, where the Turkish atrocities against the Armenians were defined as “a crime against humanity and civilization”. According to them, the Turkish government was responsible for the crime. The Armenian Genocide committed by the Ottoman government has been substantiated, recognized and confirmed by eyewitness reports, laws, resolutions and by the decisions of numerous states and international organizations. Numerous organizations such the Council of Europe, the European Parliament, several UN commissions, World Union of Churches, MERCOSUR Parliament admitted the Armenian Genocide. Many countries have recognized the Armenian Genocide, Uruguay was the first country that officially recognized the Armenian Genocide in 1965.  The Armenian massacres were officially criticized and recognized as Genocide based on international law by the following countries: France, Italy, Belgium, the Netherlands, Switzerland, Sweden, Russia, Poland, Lithuania, Greece, Slovakia, Cyprus, Lebanon, Uruguay, Argentine (2 laws, 5 resolutions), Venezuela, Chile, Canada, Vatican, Australia, Austria, Luxembourg, and 44 states of the US.