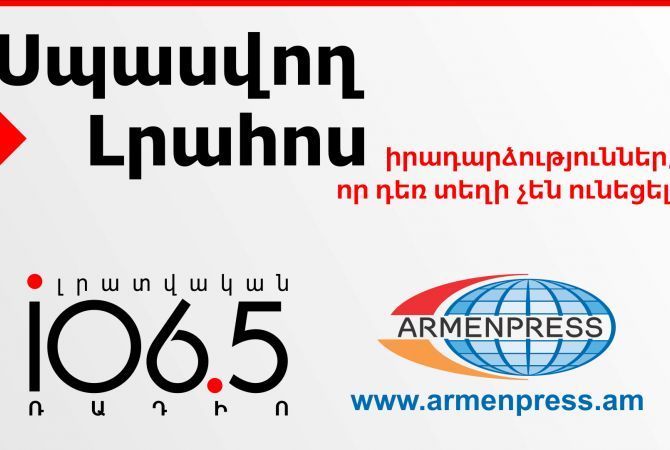 The Government has developed a poverty reduction program in Tavush. The Government will hold a daily session on April 21 where they will discuss the adoption of 2016-2019 socio-economic development program for Tavush district. The program aims to contribute to the reduction of poverty, development of infrastructure and creation of  favorable conditions for the development of SMEs. Another issue will also be discussed relating to the restoration of school military cabinets.

On April 22 “INVEST ARMENIA 2016” conference will be held in Yerevan the aim of which is to present the investment opportunities and prospects of Armenia’s economy and try to attract foreign entrepreneurs. Before the conference the President of the Union of Industrialists and Enterpreneurs Arsen Ghazaryan and “INVEST ARMENIA 2016” Project Coordinator Vruyr Penesyan will speak about the details of the conference and the possible cooperation and prospects of Armenia-Iran-Eurasian Union in an interview with journalists.

The world’s first memorial will be opened in Ring Park, Yerevan devoted to the memory of innocent victims of Yazidi people Genocide in Sinjar province, Iraq.

Swiss people support the border villages of Armenia. The members of “Aid Armenia” charitable foundation Board of Trustees will summarize the work done so fair and will present their future plans.

The recent events in Artsakh, the possibilities and consequences of military operations in the region: the 101th anniversary of the Armenian Genocide: Editor-in-chief of “Azdak” newspaper in Lebanon Shahan Gantaharyan, the director of the Institute of Oriental Studies of NAS, an expert in Turkish studies Ruben Safrastyan, the Director of the Institute of History of NAS Ashot Melkonyan will speak about these topics.

Doctor in Historical Sciences, Professor Edik Minasyan will speak about the process of international recognition of the Armenian Genocide, the current achievements and future steps.

Armenia is on 74th place among 18O countries in the Media Freedom rankings, “Journalists without borders” international organization reports this. Our country improved its ranking by 4 point compared to the previous report. Armenia is ahead of Israel, Italy, Greece and Cyprus. The President of Yerevan Press Club Boris Navasardyan will present the steps conducted for achieving that result.

You can read about these and other topics on armenpress.am and listen to the news on the air of “LRATVAKAN”. Follow us on TWITTER and FACEBOOK.