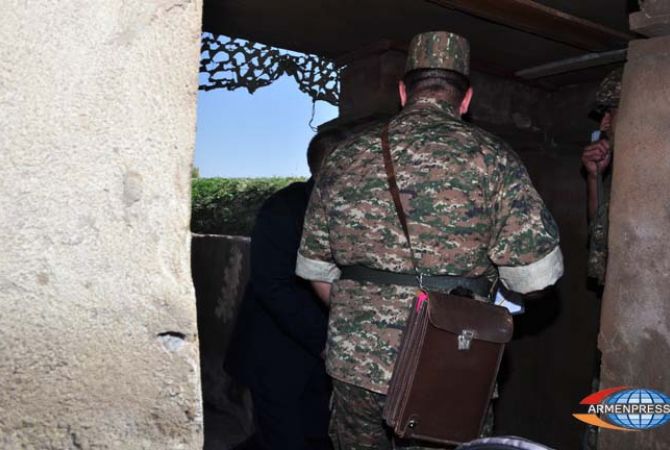 
YEREVAN, APRIL 15, ARMENPRESS. The Ministry of Defense of Nagorno Karabakh announces that the Azerbaijani side continues violating the ceasefire agreement, as a result of which an Armenian serviceman was killed; “Armenpress” was informed by the Press Service of the Nagorno Karabakh Defense Ministry.

The announcement reads: “The situation in the line of contact remained the same during the night of April 14-15. Azerbaijan violated the ceasefire agreement more than 60 times by firing various caliber weapons, including mortars and sniper rifles along the entire line of contact. The situation was particularly tense  in the northern (Gyulistan), northeastern (Talish-Martakert), northern (Martuni) and southern (Hadrut) directions, where the Azerbaijani side besides firing different caliber weapons also used 82mm (3 shells), 60 mm (12 shells) mortars and AGS-17 grenade launchers (16 grenades).

It is distinctive, that these recent violations by Azerbaijan gradually become incidents involving human loss.

On April 14 at 23:30, Defense Army serviceman Manvel A. Gevorgyan was killed in the Martuni direction by Azerbaijani fire.

Taking into consideration this incident, the Defense Army forces conduct their military duty consistent with the development of the situation and confidently continue defending and patrolling the borders of Nagorno Karabakh. The Azerbaijani side bears the whole responsibility for the consequences of the incidents.”