Larisa Alaverdyan: Armenian side has no POW from Azerbaijan | ARMENPRESS Armenian News Agency

Larisa Alaverdyan: Armenian side has no POW from Azerbaijan 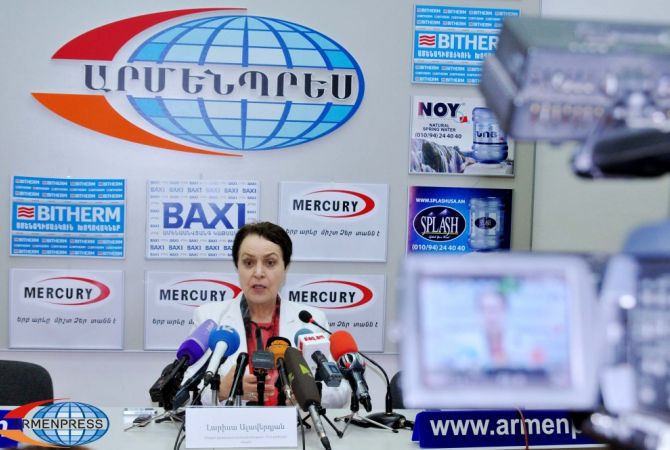 
YEREVAN, APRIL 8, ARMENPRESS. The Armenian side has no POW (prisoner of war) from Azerbaijan, the Executive Director of the Foundation “Against the Violation of Law” Larisa Alaverdyan said this during the press conference in “Armenpress” press hall. “We have the bodies of Azerbaijani soldiers. I would like to say that the Armenian side follows all humanitarian norms. Armenia collected the bodies, keeps them in proper conditions and does nothing with them, which we cannot say for Azerbaijan”, said Larisa Alaverdyan pointing out that the mishandling with the bodies is the signature of Azerbaijan.

Referring to the missing in action Larisa Alaverdyan mentioned that the authorities carry out the necessary steps at the highest level and cooperate with the International Committee of the Red Cross. “I assure you that the work is being carried out at professional level”, said Larisa Alaverdyan and referred to the situation of the missing in action stating that they do not know about them whether they are alive, wounded or just simply they are hidden in the forest.

According to the data of the Defense Army, the Azerbaijani armed forces fired MM-21 (Grad) multiple rocket launcher on April 2, at 08: 30 in the direction of Martuni (NKR), killing 12 year old Vaghinak Grigoryan and wounding two other children. 4 other civilians were wounded later.On April 3 the subversive group of Azerbaijan brutally killed 3 elderly and vandalized their corpses in Talish village.

The Armenian side has 44 causalities, 21 soldiers missing, 122 wounded. 5 more people including the heads of two rural communities of Syunik Marz,were killed on their way to Martakert on April 4.

Due to the timely and professional actions of the Nagorno Karabakh Defense Army, it was possible to take the situation under control, and make the enemy suffer considerable losses. On April 1-5 as a result of the crushing counterattacks by the Armenian side against the military aggressions towards the Nagorno Karabakh Azerbaijan lost 2 helicopters, 24 tanks, 3 infantry fighting vehicles, 7 UAVs, 1 21-MM multiple rocket launcher system. During military operations the Azerbaijani armed forces had more than 300 causalities, nearly 2000 wounded. On April 5 at 12:00, the fire was ceased in the line of contact between Karabakh and Azerbaijani opposing forces. The agreement of ceasing the fire was reached at the meeting of the Chiefs of General Staff of Armenia and Azerbaijan in Moscow on April 5.