Putin: If necessary, Russia is capable of building up its forces just in a few hours | ARMENPRESS Armenian News Agency

Putin: If necessary, Russia is capable of building up its forces just in a few hours 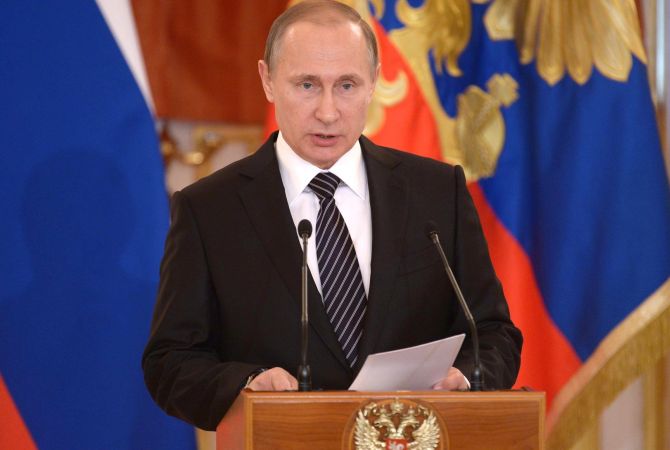 "The military operation in Syria, of course, required certain spending but the main part was from Defense Ministry’s resources - around 33 billion rubles. [This sum] was included in the ministry’s 2015 budget for holding drills and military training. We just redirected these resources for supporting the group in Syria," Putin said.

"No one has invented a more effective way to perfect one’s military skills than in real combat actions. In this sense, military resources should better be used and spent in action than at the training range," the president added.

According to the president, additional costs are required after the operation in Syria but they are justified in order not to pay a higher price in future.

Putin also pointed out that Russia's weaponry has been successfully tested in combat in Syria and this experience will help improve the Russian Armed Forces.

"The modern Russian weaponry has proved its worth in real combat conditions rather than at training ranges. This is the most rigorous test," Putin said, thanking all the workforce of the Russian defense industry.

"This experience will help us make necessary adjustments, raise the efficiency and reliability of military hardware, develop new-generation weapons, improve the Russian Armed Forces and build up their combat capabilities," Putin said.

"Life itself has showed that this is a guarantee of our country’s security," Putin said.

"The main agenda in Russia for today is, of course, peaceful. It includes working on development of the economy in uneasy conditions, maintaining and increasing the welfare of our people. However, we cannot solve any of these tasks without ensuring security, without building a combat-ready and effective army and navy," Putin said. He noted that "without this, the existence of sovereign independent Russia is impossible."

"The tasks that were set for you have been fulfilled in general. Units and divisions are returning to places of their permanent deployment, returning home to Russia," the Russian president said addressing the servicemen who returned from Syria.

"If necessary, Russia is capable of building up its forces just in a few hours to a scale that is appropriate for the developing situation, and using the whole arsenal of available capabilities," Putin said.

"We would not want to do this, military escalation is not our choice," the Russian president added. "That is why we mainly hope for the common sense of all sides, for commitment of both the Syrian authorities and opposition to the peaceful process," he noted.