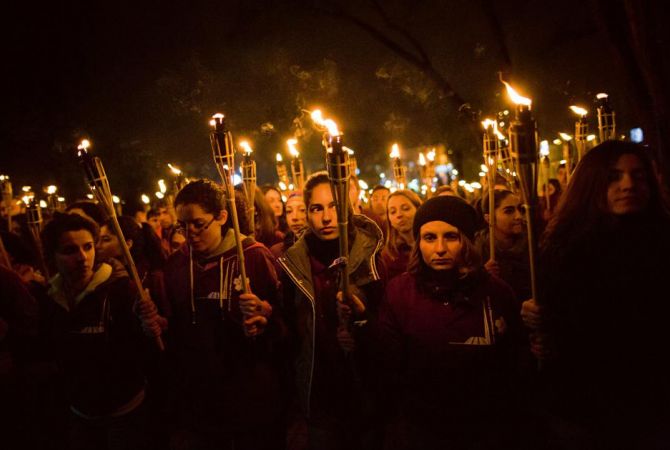 
YEREVAN, MARCH 12, ARMENPRESS. Where Armenians once flourished, the 'great catastrophe' is an enduring reminder of pain and controversy. The extended article by journalist Paul Salopek and photographer John Stanmeyer of National Geographic starts with this sentence.  The article touches upon the memories of the survivors and the positions of modern Armenia and Turkey on the issue. “One of the oldest and most intractable political disputes in the world—a toxic standoff that has locked Armenia and Turkey in acrimony, in enmity, in nationalist extremism for generations—can be reduced to the endless parsing of three syllables: genocide. This word is freighted with alternative meanings, with shadings, with controversy. It is codified by the United Nations as one of the worst of crimes: the attempt to obliterate entire peoples or ethnic, racial, or religious groups”, writes the National Geographic.

“Armenpress” report the author visited Ani city, the medieval capital of the Armenian Kingdom, mentioning that once it used to be a wealthy and powerful metropolis.  “It was a rich metropolis that hummed with 100,000 souls. Its bazaars overflowed with furs, with spices, with precious metals. A high wall of pale stone protected it. Renowned as the “city of 1,001 churches,” Ani rivaled the glory of Constantinople. It represented the flowering of Armenian culture. Today it crumbles atop a remote, sun-hammered plateau—a scattering of broken cathedrals and empty streets amid yellow grasses, a desolate and windblown ruin”, the author writes. 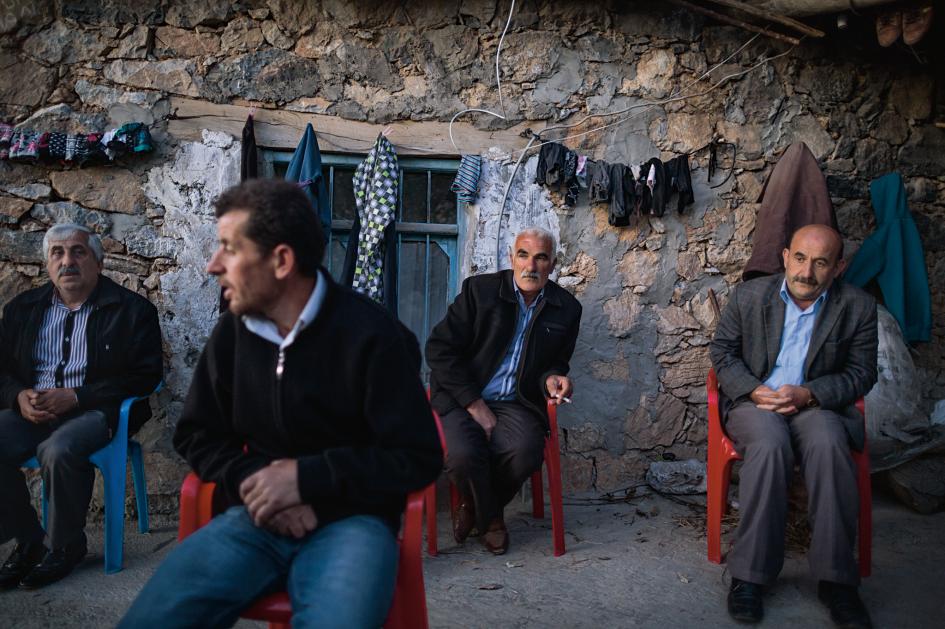 “And it is true: On the Turkish government placards erected for tourists, the builders of Ani go unnamed. This is intentional. There are no Armenians left in Ani. Not even in official histories. So just as Tsitsernakaberd hill in Yerevan calls to remember, Ani is a monument to forgetting”, Paul Salopek says.

He documents that challenging the Turkish official view still carries risks in Turkey. Though prosecutions have eased, Turkish judges deem the term “genocide” provocative, incendiary, insulting to the nation. The author states that the Armenian diaspora has spent decades funding lobbying campaigns to urge the governments of the world to deploy the term “Genocide” when describing what occurred under the Ottomans.

The authors of the National Geographic met with the genocide survivors in Armenia and talked about the horrifying events of 1915. One of the survivors is Khosrov Frangyan, 105, who recalled some memories in an interview with the journalists. 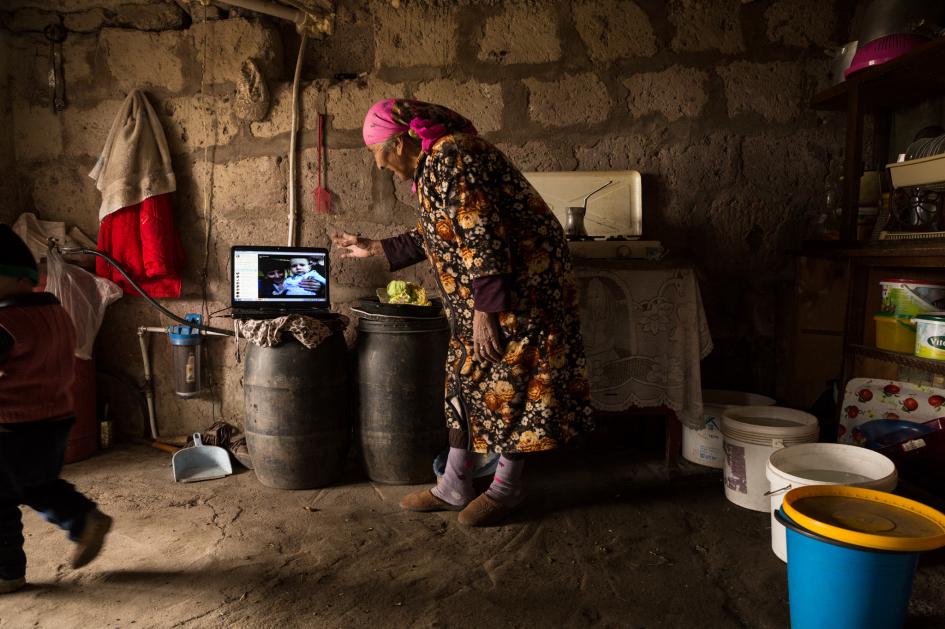 He recounts his story in shards. It is a fabled incident from the genocide. Some 4,700 residents of six Armenian villages in what is now southern Turkey fled up a coastal mountain called Musa Dağ. They rolled rocks down on their Turkish pursuers. They held out for more than 40 days. The desperate survivors waved a handmade banner at ships steaming past along the Mediterranean shore. “CHRISTIANS IN DISTRESS—RESCUE.” By some miracle French warships saved them and carried them off to Egypt, to exile.

“The gardens! My grandfather had figs—each tree was 50 meters high! I want to eat those bananas now! I want to keep the memory of those bananas!” Frangyan said with wet eyes. A century ago the French Navy rescued Frangyan and his family.

“In eastern Turkey I walk by derelict Armenian farmhouses. Trees sprout from their rubble, their roofless rooms. I walk past old Armenian churches converted to mosques. I sit in the mottled shade of walnut orchards planted by the long-ago victims of death marches”, the author writes. 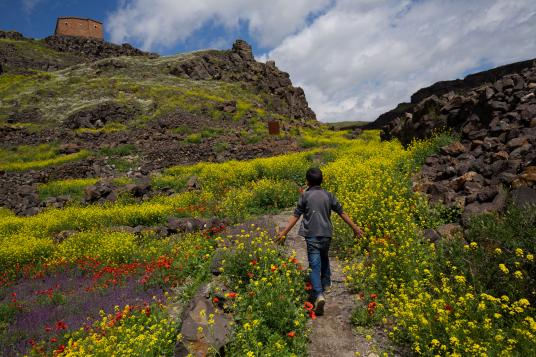 “We fought the Armenians, and many died,” says Saleh Emre, the gruff, white-haired mayor of the Kurdish village of Taşkale. He suddenly softens. “I think this was wrong. They belonged here.”

Salopek writes that Kurds occupy a strange place in the violent history of eastern Turkey. From a frontier gendarmerie who did the Ottomans’ dirty work a century ago, they have become a besieged ethnic minority, demanding more political rights in modern Turkey. Emre tells the authors that his family acquired the village from local Armenians. Then he mentions names of towns near the village that once belonged to Armenians, but where no Armenians live now. 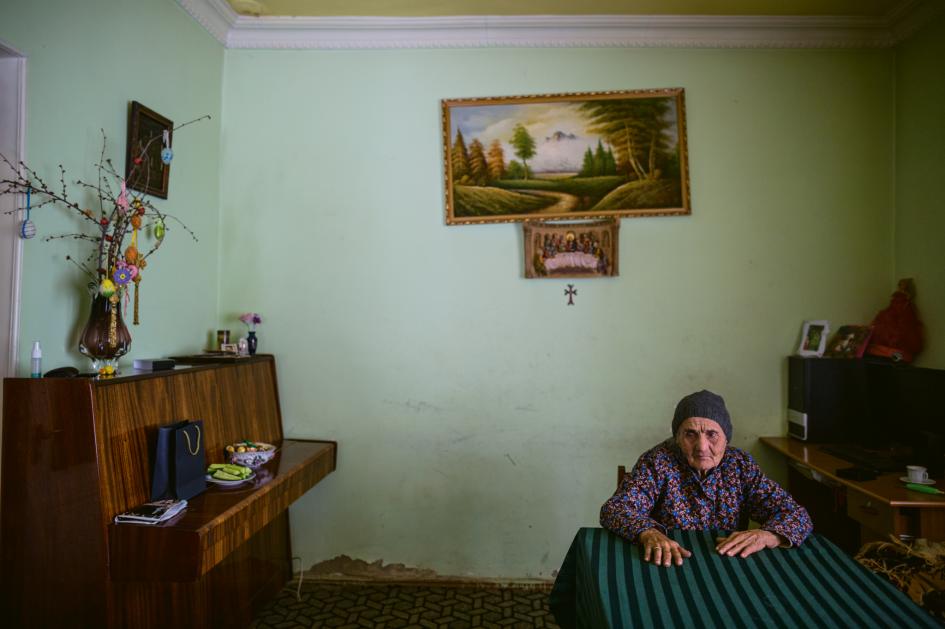 “When does a genocide officially end? At which point is the act of mass annihilation complete—finished, documented, resolved? Surely not when the gunfire stops. (This is far too soon.) Is it when the individual dead disappear from the chain of human memory? Or when the last emptied village acquires a new population, a new language, a new name? Or is it sealed, at long last, with the onset of regret?”, writes the author.