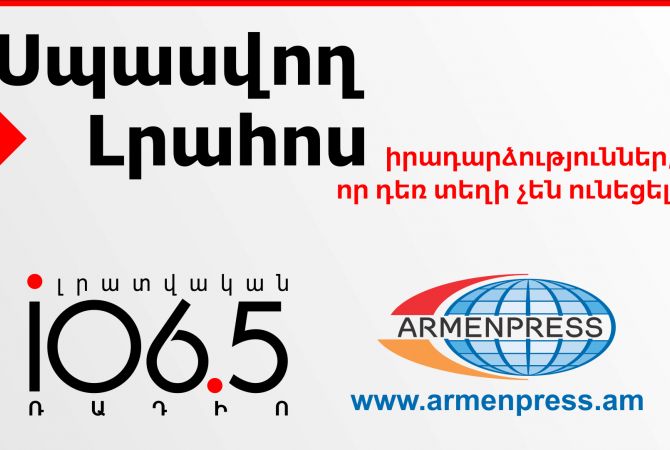 
YEREVAN, FEBRUARY 1, ARMENPRESS. “Armenpress” state news agency introduces on the air of Lratvakan.am all that you will read, hear and see on today’s news.

Negotiations on Syrian issue take place in Syria between Syrian government and opposition. It is held by mediation of Special Envoy of the Secretary-General for Syria, Staffan de Mistura. The mediators have high expectations regarding the negotiation process. Today, on February 1, Geneva negotiations and the ensuing developments are the topic of discussion in the political field of Armenia. Ambassador Extraordinary and Plenipotentiary Arman Navasardyan will refer to the developments in the Middle East, negotiations on Syrian issue and , of course, to NKR conflict in the context of regional developments.

What is the link between the higher educational institutions and employers? To what extent is university graduate ready and what issues exist in this sector? These and other questions will form cooperation between university and employer.

Denomination, Satanists and the ensuing problems are considered as hypothesis of Permyakov’s being a Satanist, who is accused of murdering the family in Gyumri.

Armenian social and political sector continue to refer the discussion on 2 anti-Armenian reports and the results of their voting in the Parliamentary Assembly of the Council of Europe. Grigory Ayvazyan, expert in Azerbaijani studies, leader of the Assembly of “Azerbaijani Armenians” will present his remarks this time.