Non-recognition of Armenian Genocide by Israel explained by political factors 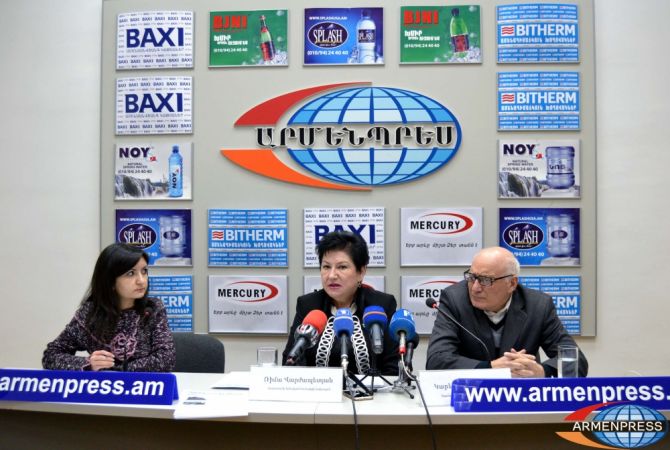 
YEREVAN, JANUARY 25, ARMENPRESS.  January 27 is the remembrance day of Holocaust victims. In over 30 countries of the world, including Armenia, numerous memorial events are organized on that day. The Jewish community of Armenia, together with the UN office in Armenia, will organize a memorial event on January 27.  The Head of the Jewish Community of Armenia Rima Varzhapetyan told about this at “Armenpress” media hall.

“Like the previous years, this year again we will gather at the memorial dedicated to the Genocide of the Armenian people and the Holocaust, and put flowers to pay tribute to millions of Jewish martyrs”, Rima Varzhapetyan said.

Referring to the developments in the Middle East and other parts of the world, Rima Varzhapetyan mentioned that today Nazi forces are emerging, maybe forgetting the vicious realities of the 20th century.

“We are witnessing painful developments in the Middle East and other countries. And if we do not say today “never again”, recurrence of Holocaust years cannot be ruled out”, Rima Varzhapetyan said.

In the words of the deputy head of the Jewish community in Armenia Karen Hovhannisyan, unfortunately, the world took no lessons from the Armenian Genocide of 1915 and later the Holocaust. “Inhumane developments go on. We witnessed what happened in a number of African countries, today the situation is tense in Europe. I think all these must foster sober-minded people to recall the past and do everything to exclude the black pages of the past to reoccur”, Karen Hovhannisyan said.

To the question why Israel has not recognized the Armenian Genocide till now, Karen Hovhannisyan mentioned that politics matters here. “According to a survey conducted in Israel, the majority of the public favors Armenian Genocide recognition. Unfortunately, often the opinion of the public and politicians differs. Many politicians promise during their pre-electoral campaign that they will recognize the Armenian Genocide in case of being elected, but as soon as they are elected, they forget their promise”, Karen Hovhannisyan said. The representatives of the Jewish community highlighted the role of public diplomacy for that issue.