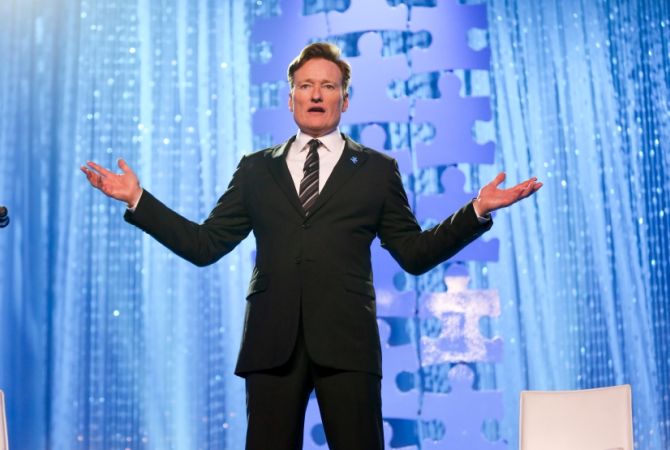 
YEREVAN, OCTOBER 15, ARMENPRESS. U.S. television host and comedian Conan O’Brien says that “Conan” episode about Armenia to be broadcast in the USA on October 10 will be very diverse. “Armenpress” reports that Conan O’Brien gave an interview to Azatutyun.am. “Armenpress” presents some highlights of the interview.

“You don’t see that in the United States, and so when you first see it here, you think: Why are they doing that? But then, I think, that’s a great idea. So, I started walking with one of my producers. We started linking arms and I actually thought: ‘This is fantastic.’ We should adopt this in the West. It’s time for us to catch up.”

O’Brien says that while he knew that the country marked the 100th anniversary of the Armenian genocide this year, it wasn’t the reason he came at this time.

“But it certainly adds a lot of importance to the visit,” he said.

“This all happened because I have an assistant who I’ve worked with for five years, Sona Movsesian, and she is always very active on behalf of the Armenian community of Los Angeles in the United States, and she is always talking about Yerevan,” O’Brien said in an interview with RFE/RL’s Armenian Service (Azatutyun.am).

"And you cannot come here and not go and visit the genocide memorial. It is an integral part of this country’s history and Sona’s history so ... It was very moving to go. ... I just thought, 'I don’t know what the politics are,' but I’m not gonna worry about that.”

O’Brien said they’ve had a lot of adventures around Yerevan and across Armenia during their four or five days of filming, getting immersed in local culture.

Conan O’Brien also expressed his opinion about the Armenians, saying:

“They [Armenians] are very intelligent people, but they are also very strong, and I don’t just mean physically strong, but spiritually very strong people,” the popular TV host says.