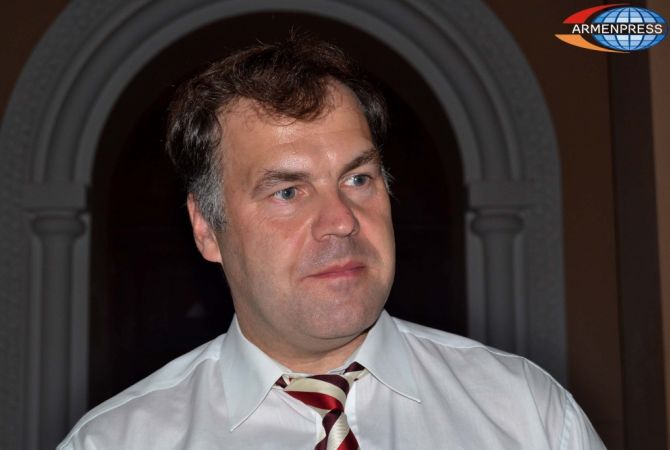 
YEREVAN, SEPTEMBER 22, ARMENPRESS. Armenian-German cultural and educational cooperation encompasses new layers. Minister of cultural affairs of the land Saxony-Anhalt, Federal Republic of Germany, mentioned about this in an interview with “Armenpress”.

“We have years-long tradition of cultural cooperation with Armenia. Initially, it was on school level. Now we cooperate in several sectors of science, education and culture. That is to say, the cooperation has expanded during these years”, Stephan Dorgerloh mentioned.

According to Minister of cultural affairs of the land Saxony-Anhalt of Federal Republic of Germany, currently exchange programs of pupils, students, teachers, and school directors are conducted between the two countries. Mutual visits are paid as well.

“Artists of the two countries visit Armenia and Germany; we organize days of Armenian culture in Germany. There is a deep collaboration between archaeologists: German archaeologists visit Armenia and conduct excavation works. There is also cooperation between scientists. They publish books in two languages. This means that the cooperation encompasses new layers and there is a necessity to sign a new agreement”, the minister informed.

On September 23 memorandum of understanding on future cooperation will be signed between the Ministries of Culture and Education and Science of the Republic of Armenia and the Ministry of cultural affairs of the land Saxony-Anhalt of Federal Republic of Germany. “We want to mention in the memorandum about the organization of Armenian and German cultural days and other events. We wish to make the bilateral events periodic”, Stephan Dorgerloh mentioned.