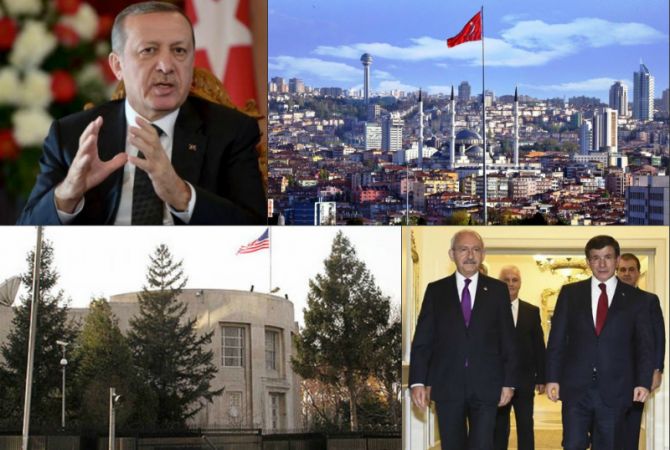 
YEREVAN, AUGUST 15, ARMENPRESS. The terrorist wave that started in late July does not come to an end in Turkey. The attacks and clashes between the terrorist organizations and low enforcement bodies in different parts of the country continue to result in new deaths. And while the chaotic situation is not over in the country the last attempt to form a coalition government failed this week. “Armenpress” followed the developments in Turkey and presents the most remarkable events.

At the beginning of the week the country shook by the terrorist attack on the US consulate in Istanbul. Shortly after the attack is was found out that the terrorists were two women. One of them, who was injured, was discovered and arrested after hours. The US Embassy in Turkey responded to the incident. The spokesperson of the Embassy mentioned that they are trying to understand what is happening.

The same day, on August 10, a fierce clash took place between the Kurdistan’s Workers’ Party (PKK) and the law enforcement bodies in Istanbul. The terrorists attacked a police station using explosives which caused a fire that collapsed part of the three-storey building. 5 policemen and two civilians were injured and taken to hospital. Shooting did not stop during the hours following the attack. One policeman and two terrorists were killed.

4 policemen in Silopi and one soldier in Beytüşşebap were killed by the PKK. The Kurdish militants attacked the command of the gendarmerie. One soldier was killed in Şırnak.

Iran closed the biggest land border checkpoint Gurbulak- Bazargan. The reason was the attack on an Iranian car in the territory of Turkey.

Turkey started building a wall on the border with Syria. The wall is 2 meter wide, 3 meter high and 8 km long.

On August 13 it became known that the ruling “Justice and Development” party of Turkey will not form a coalition government with the Kemalist Republican People's Party. Ahmet Davutoğlu announced about this giving much possibility to early parliamentary elections.

On August 11 the Turkish mass media wrote that two fugitive previous prosecutors  Zekeriya Öz and Celal Kara entered Armenia through Georgia. Though “Armenpress” was informed from the NSS of the Republic of Armenia that they possessed no such information, Erdoğan did not hesitate to repeat the hypothesis of the two prosecutors having fled to Armenia.

At 23:30 of August 13 unidentified persons arrived at Tuzla district of Istanbul and made a racist attack at the security guards of the famous Armenian orphanage “Camp Armen”. Two young people on permanent duty there were beaten. Armenian Selina Dogan elected as a deputy from the Turkish Kemalist Republican People's Party expressed her annoyance over the attack and declared that as long as the attackers are not been exposed the authorities are responsible for it.