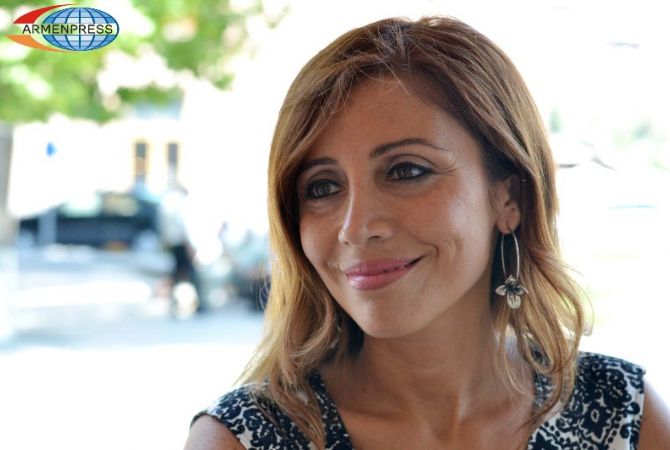 
YEREVAN, AUGUST 6, ARMENPRESS. She was able to conquer the hearts of many nations, especially the Turks, with her beautiful voice and unique Armenian songs.

Istanbul Armenian singer Sibil Pektorosoglu has many admirers in Armenia too, who are looking forward to their meeting with the singer.

This time the singer came to Armenia to perform at the 6th Pan-Armenian Games. Armenpress talked with Sibil Pektorosoglu about the surprise made by President Serzh Sargsyan, music and songs, roots and other matters.

I’d like to see lots of sights in Armenia

When I come to Armenia, it is like scurrying around. I don’t get much chance to have a stroll. I wish I could come to Yerevan only to have a stroll and not work. There are many places I have never seen but would like to.

On “Gratitude” Medal by the President of the Republic of Armenia

It was a great surprise for me as I did not expect the award. I was very happy, certainly, such awards, medals are inspiring. They make me happy, they encourage me.

Sibil’s family also had victims during the Armenian Genocide

My mother’s side was from Sivas and Tokat, all people from my father’s side are Istanbul Armenians. Unfortunately, there were victims in our family due to the Armenian Genocide. My grandmother lost her whole family.

My father used to take me to church

Every Sunday he took me to church holding by my hand. I can say that I was raised in church, I grew under those melodies. I have been a member of the choir, I sang in the choir for many years but I like solo more. I tried to satisfy my love with Armenian songs in the choir.

My father made me talk Armenian

The singer works in a bank

I work in a bank. It is an investment bank: I have to leave my celebrity aside and go to work on Monday. My colleagues treat me very well, sometimes when I return from awards giving ceremonies where I walked on red carpets, they joke saying, “Sibil, we are sorry but the carpets are not red here”, when we are in the same elevator they joke saying, “Wow, we are with a star”. But I live a modest and normal life.

It was a big surprise, especially broadcasting on the state channels. Another 8 songs are to be broadcasted on the Turkish state channels; the program is expected in September.

I do not know when I will realize that dream. My dream to sing among the ruins of Ani came into reality recently due to Chairman of the World Pan-Armenian Games Committee Ishkhan Zakaryan. I need someone who can introduce me to Charles Aznavour.

I have many dreams; one of my biggest dreams is to become a world famous singer so that foreigner could also listen to my songs though, of course, there are foreigners who listen to me.

I know that my fans are always by my side, that they love me. I have plans to have concerts in the United States and other places. I have recently presented my 2nd album. I have had other works for a year: new songs, videos, I hope they will come true. On September 24 I will participate in the concert of my friend and record producer - Majak Tosikyan.

11:29, 05.19.2022
2825 views U.S. recognizes role of population of Nagorno-Karabakh in deciding its future–Ambassador Tracy’s interview to ARMENPRESS