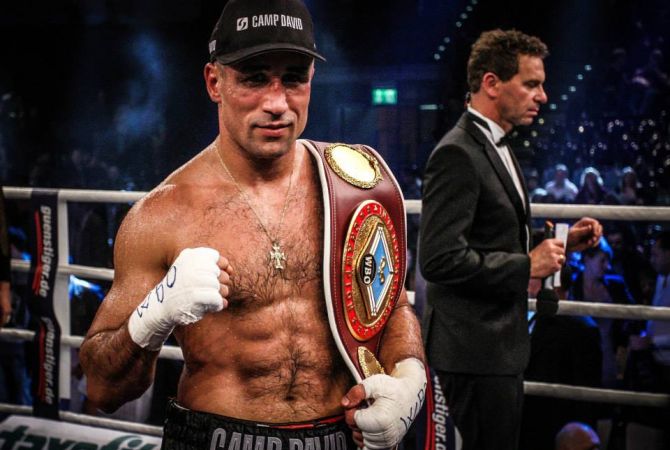 The bout of the two boxers representing Germany took place in the German city of Halle. Abraham was very active during the first rounds and Stieglitz ended up with a knockdown in the 4th round. In the 6th round Arthur Abraham knocked out the German boxer.

Arthur Abraham was born in Yerevan on 20 February 1980 to parents Grigor and Sylvia Abrahamyan. His family members call him "Avo", short for Avetik. He moved to Germany with his parents and brothers at the age of 15. He became a citizen of Germany in August 2006, in order to do that he had to drop the Armenian citizenship. Arthur Abraham is a stage name, so he had to draw a painting at the registration office to register it in his passport. As a teenager, Abraham showed an interest in cycling. He became the North Bavarian and Franconian Youth Champion. However, after watching an exciting Mike Tyson fight, Arthur was inspired by Tyson's intensity and wanted to become a boxing star too. In 1999, Arthur and his brothers returned to Armenia for military service. After 2002, all the brothers had finished their military service and returned to Germany in 2003.

Abraham plans on opening a boxing school in Armenia following his future retirement. He will also have foreign language classes for students at the boxing school, such as English and German. "If a boxer knows no foreign language, he cannot have success internationally," Abraham noted.

Abraham boxed as an amateur in Bamberg and later in Nuremberg. He was an International Junior Welterweight German Champion in 1997 and a three time Senior Light Middleweight Armenian Champion in 2000, 2001 and 2002. His final amateur record was 81-3-6 (48 KO).

In 2003, Arthur and Alexander competed alongside promoter and manager Wilfried Sauerland and his head coach Ulli Wegner. Arthur was a sparring partner for IBF and WBA Super Middleweight Champion Sven Ottke, whom was in the preparations of a title defense. Wegner was so impressed that he began to train Arthur personally.