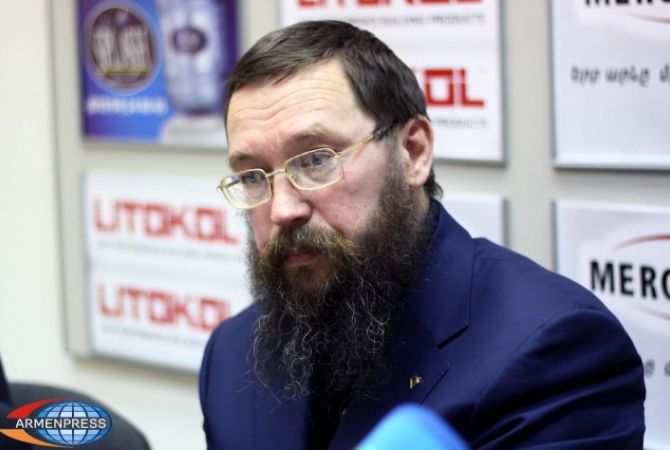 
YEREVAN, JULY 9, ARMENPRESS. Russia’s wealthy entrepreneur German Sterligov, who intends to settle in the Nagorno-Karabakh Republic with his wife and 5 children, has told why he left Russia. As Armenpress reports, Sterligov said in an interview with REN TV, “I will tell a simple truth that many might not like but still, it is better than the groundless statements that are currently made about me and my family.” The entrepreneur mentioned how wonderful he found the place where he decided to move. “Armenians who have such a motherland, such a history and such beautiful sights are happy. I have travelled all over the world but nowhere have I seen such abundance and most importantly such cordial interpersonal relations. The aggression level is zero here,” he said.

He added that he is happy to have brought his children with him. He mentioned that unfortunately there are no such warm relations in modern Russia as there are in Nagorno-Karabakh. He finished his speech by inviting everybody to Nagorno-Karabakh describing it as an ancient reserve of human relations that the Armenians have preserved. Sterligov is going to hold a press-conference on July 13.

Ministry of Foreign Affairs of Azerbaijan had earlier announced their intention to include wealthy businessman German Sterligov in Azerbaijan’s notorious “black list”. As Armenpress reports, Hikmet Hajiyev - Azerbaijani Foreign Ministry spokesperson - informed this to Azerbaijani media outlets. Azerbaijan has created a hilarious black list which includes officials, journalists, world-famous people and even students who paid a visit to the Nagorno-Karabakh Republic. German Sterligov, his wife and 5 children left from Russia for NKR 3 weeks ago. The rich businessman is going to settle in NKR and start a new business there. For this reason he assigned his helpers to sell his possessions in Russia.

Azerbaijan’s Foreign Affairs Ministry earlier declared the Russian singer Ljuba Kazarnovskaya an ‘undesirable person’. The latter was giving master classes in Stepanakert State Music College named after Sayat-Nova. Commenting on this, the singer said, “I am in the same list with Montserrat Caballé and I am proud of it. The Nagorno Karabakh Republic is a great place, where I took young people. I am not concerned. As long as there is aggression in the world, no peace will reign. Here, in Karabakh, people want peace.” The world-renowned singer informed that she is going to perform Giuseppe Verdi’s “Requiem” in NKR in the near future, as well as to establish an opera studio in Stepanakert.

The Foreign Ministry of Azerbaijan started publishing its black list since 2013. The blacklist of foreigners who are banned to enter Azerbaijan includes individuals who visit the Republic of Nagorno-Karabakh without making an agreement with the authorities of Azerbaijan. This list extends year by year. World famous artists, intellectuals, and politicians are included in the list.