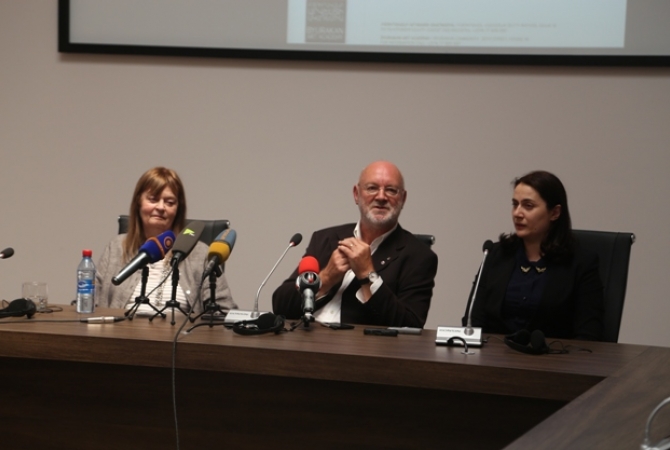 
YEREVAN, JUNE 26, ARMENPRESS. Love, losses and desires are intertwined in British poetess and musician Ginny Henson’s new collection of poems called “Under the Clouds.” The author dedicated the English-Armenian publication of the book to the anniversary of the Armenian Genocide. Ginny Henson – guest of the “Yerevan Perspectives” International Music Festival – is in Armenia to present her new book in the Byurakan Academy of Arts on June 27. She came to our country with her husband – famous Scottish conductor David Davis.

Sona Hovhannisyan – Director of “Yerevan Perspectives” International Music Festival – said that the couple paid a tribute to the victims of the Armenian Genocide in the Genocide Museum and were very touched.

As Armenpress informs, Sona Hovhannisyan stated: “The couple have served culture, education and friendly relations between nations throughout their life. It is a great honor that they are our guests. The presentation of Ginny Henson’s book will take place in Byurakan on June 27 but a funny case happened: the books did not arrive from Paris in Armenia. They will be in Armenia later.”

The book “Under the Clouds” is Ginny Henson’s first collection of poems. “Coming to Armenia is equal to going home to me. I feel surrounded by my friends and relatives. I am looking forward to the presentation,” she noted.

Henson’s husband – Scottish conductor David Davis – is in our country for the fourth time. He mentions that he came to Armenia as a conductor previously.

“I consider myself part of Armenia. I am here as a man who is Armenia’s friend. I share your pain. I let myself say on behalf of the entire Scottish nation that we share your pain and pray for the recognition of the Genocide. We should do everything for Armenia to have a prosperous future,” he highlighted.

The presentation is held with the support of the Committee coordinating the events dedicated to the 100th anniverasary of the Armenian Genocide and “Pyunik” charitable foundation. Ginny Henson’s book will also be presented in the United Kingdom. The presentation will take place in London in September.